The big challenge with Laura Gabbert and Justin Schein‘s No Impact Man (Oscilloscope, 9.11, NY and LA) is not to fight it. You need to let it in and let it swim around and settle in of its own accord. Or not. But you have to at least give it a chance. Because if you do…well, no guarantees. But you may find yourself looking at your habits in a slightly more earth-friendly manner, and how can that not be a good thing?

I hated the idea of watching this damn thing. It was showing last Thursday night at a press screening on Hudson Street, and I was going “oh, crap.” What could be drearier, I muttered, than observing a year-long experiment by blogger Colin Beavan and his wife, Business Week staffer Michele Conlin, and their daughter to live for a year in their ninth-floor West Village apartment without contributing in any significant way to the pollution, global warming and general ruination of the planet?

Okay, nice idea but c’mon…don’t make me watch this. I get it but I don’t feel like going there. Really.

We can all reduce our carbon footprints if we choose, and there are obviously healthier ways of living than others. I’ll bet I contribute a lot less garbage to the world than tens of millions of bison-sized fast-food eaters and constant fossil-fuel burners out there. I could probably do better, okay, but the idea of living in such a monk-purist way that I’d have no impact whatsoever? C’mon…that’s excessive. That’s tedious. Get outta here. Or as one guy angrily tells Colin in an email, “I can’t wait to wipe my ass with the pages of your book.”

Oh, right…forgot about the book. It’s called “No Impact Man: The Adventures of a Guilty Liberal Who Attempts to Save The Planet and the Discoveries He Makes About Himself and Our Way of Life in the Process.” (They handed out free copies at the screening.) And Colin’s No Impact Man blog is…well, here.

But what happens is that the film starts, the experiment begins and gradually the denial thing doesn’t seem so bad. Or at least it begins to seem tolerable. Colin and Michele get used to this and that deprivation, and so do we in a sense. They stop using their refrigerator. They give up electricity at the six-month point. They wash their clothes by stomping around barefoot in a bathtub filled with their dirties and I-forgot-what-kind-of-cleanser. They stop using toilet paper. (How does that work?) They ride their bikes around and start losing weight due to not eating take-out. They do without air-conditioning in the summer. (Good God!) 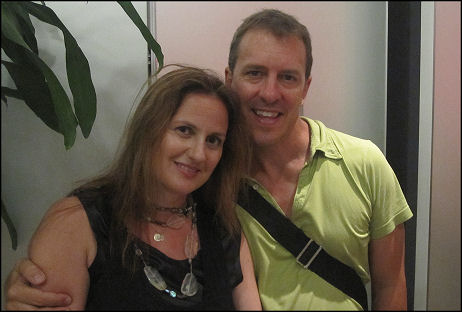 “No Impact Man” author Colin Beaven (r.) and wife Michele Conlin (l.), who are the “stars” (along with their daughter Isabella) of Laura Gabbert and Justin Schein’s doc. Taken Thursday, 8.20 at 9:35 pm.

Colin’s basic point seems to be “if my wife and daughter and I could live this purely and monastically for an entire year and have a good happy life in the bargain, can’t you guys change your lives at least somewhat in order to save the planet?”

Is No Impact Man entertaining? Well, Michele is kind of fun to hang with (or at least a bit more fun than the pleasantly candid but glumly earnest Colin) but I can’t say the film actually “entertains.” Does it deliver emotional touchstone moments like a good Michael Moore doc? Uhn…not really. Is it tight and true in that it gets down to business and doesn’t meander and holds its focus? Yeah, for the most part, but at the same time it feels a tiny bit draggy in the final third. It runs 90 minutes. I wouldn’t have minded 75 or 80.

But overall it’s coming from a good and intelligent place and I’m glad I saw it. Really. It got me thinking about my bad habits and how I might erase or correct some of them.

Will the popcorn-munching, KFC-eating 20something Eloi ever pay No Impact Man the slightest heed? Yes — if their children show it to them on their deathbeds 50 or 60 years from now, and I mean if the kids strap them to their beds. inject them with some kind of wake-up drug and make them wear Clockwork Orange eyelid-clamps.

I asked Michele during the after-party how she and Colin and their daughter managed to avoid using toilet paper for a year. Michele went “no!” and kind of half-chuckled when I asked if they used some kind of re-usable cloth rag, but she never said what the actual trick was. (Some kind of sponge in a water pot, is my guess.) A disgusting topic, sure, but the movie is about alternatives, right?

The screening was attended by 85% women. Singles, couples, groups of three, etc. There were two or three boyfriends and a couple of stag guys but Jett and I were the only men who attended together. Why was that? Something to do with nest-tending instincts morphing into earth-tending meditations? That was my theory, at least. The bottom line? At the end of the day No Impact Man will probably settle into the public consciousness as a chick flick.

August 23, 2009by Jeffrey Wells6 Comments
« Previous post
“If I’ve Only One Life to Live…”
Next post »
Giving Weinsteins Their Due