Will SAG members understand and perhaps be swayed by James Franco‘s plea for respect and recognition (i.e., a Best Supporting Actor nomination) for Rise of the Planet of the Apes‘ Andy Serkis? Franco’s thoughts appeared earlier this afternoon on Deadline.com, and they’re very well-composed. Franco sounds like an actor talking straight to other actors, explaining the technological facts without any b.s. 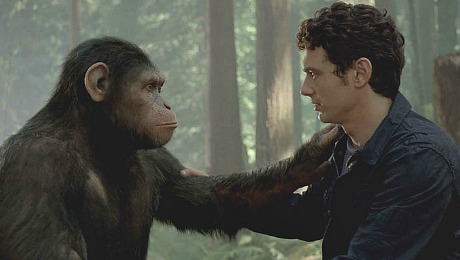 Andy Serkis, James Franco in Rise of the Planet of the Apes.

“I, as much as anyone, can get anxious when I think about the future of movies and the possibility of the obsolescence of actors, or at least actors as we know them,” Franco states. “But after making Apes I realize that this is backward thinking.

“Performance Capture is here, like it or not, but it also doesn’t mean that old-fashioned acting will go the way of silent film actors. Performance Capture actually allows actors to work opposite each other in more traditional ways, meaning that the actors get to interact with each other and look into each other’s eyes.

“For years computer technology forced actors to act opposite tennis balls if a movie wanted to have CG creatures, but now the process has come full circle so that actors playing CG creatures can perform in practical sets, just like the ‘human’ actors. In acting school I was taught to work off my co-stars, not to act but react and that was how I would achieve unexpected results, not by planning a performance, but by allowing it to arise from the dynamic between actors.

“On Rise of the Planet of the Apes that’s exactly what I was able to do opposite Andy as Caesar. And Andy got to do the same because every gesture, every facial expression, every sound he made was captured. His performance was captured. Then what the Weta effects team did was to essentially ‘paint’ the look of Caesar over Andy’s performance. This is not animation as much as it’s digital make-up.”