No Longer The Big Cheeses

I’ve almost become accustomed to reading Indiewire articles and reviews for the amusement factor. Because whatever they post, eight times out of ten it’s tainted by skewed or myopic political-cultural attitudes (Indiewire being more or less Woke Central) or extremely supportive, staunchly non-judgmental reviews of any indie film at all with a Sundance imprimatur, a #MeToo, POC or LGBTQ stamp, or a general woke-agenda vibe.

So I was almost startled to read what looked like a tough, declarative, Vanity Fair-sounding piece about how Hollywood is no longer a studio-controlled industry and how the struggling exhibition industry has painted itself into a corner. 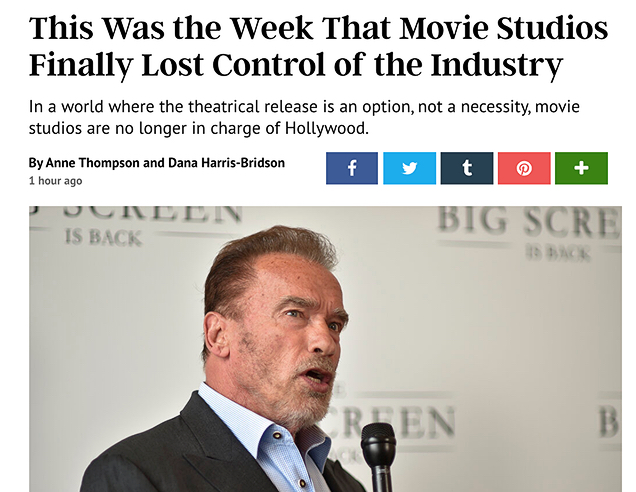 Written by Anne Thompson and Dana Harris-Bridson, it’s called “This Was the Week That Movie Studios Finally Lost Control of the Industry.” The ostensible trigger was attending “The Big Screen Is Back”, a Century City gathering intended to promote the the return of theatrical, but the big news was AT&Ts decision to turn tail and abandon the movie distribution business. Last Monday the communications behemoth announced that WarnerMedia (CNN, TBS, TNT, Warner Bros. film and Tv + HBO slash HB0 Max) and Discovery are merging into one, and that head of this new company will be Discovery CEO David Zaslav.

Key paragraph #1: “We have reached a point where ‘major movie studio’ has begun to sound like an anachronism. Certainly, Warners and Universal and Paramount and Disney and Sony remain premier global suppliers of films that generate billions — but the studio bosses occupy a lower position on the power charts because it’s no longer the movie business that drives the industry.”

HE retort: Maybe so, but “the movie business” has always had a river running through it, and that river is know as the Grand Tradition of Movie Catholicism — a current that drives the heart and spirit of this town, at least among people with a soul. The more that unfaithful dilletante product assemblers and marketers ignore this basic spiritual current the less “Hollywood” this community will be.

Key paragraph #2: ‘Slammed by global lockdowns, the biggest theater chains are also the victims of their overspending, debt burdens, real-estate deals, and mostly, denying reality. Before the pandemic, they could have struck better terms with the studios on shorter windows and revenue sharing. They held out too long.”