It’s time to acknowledge a fundamental truth (and okay, perhaps a prejudice) in the wake of yesterday’s news about Paramount’s decision to release Martin Scorsese‘s Hugo Cabret on 11.23. The forthcoming 3D drama has been described as basically another orphan story in the tradition of Oliver Twist, Annie and the Harry Potter films, and I’m telling you right now that movies about orphans have never reached me, much less melted me down. 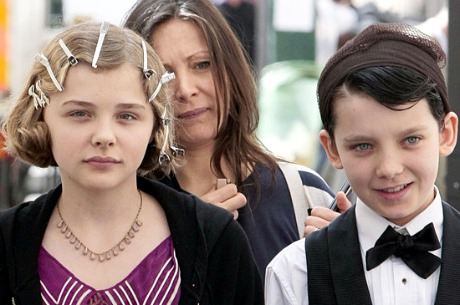 Growing up young and vulnerable without parental support is painful and wounding, but it also toughens and demands invention, adaptation and resourcefulness. I just don’t see it as being that much different than being raised by abusive or alcoholic parents, and it may not be as bad.

Bottom line: Each and every orphan film I can think of has left me cold or not especially moved because orphan movies (except for the Batman‘ pics) are inherently cloying and emotionally manipulative. You could call The Girl With The Dragon Tattoo an orphan film, and that didn’t put the hook in either.

On top of which is a standard Scorsese assessment: the more earnestly emotional the subject matter, the less successful the film. Scorsese is much, much better when he’s dealing in oblique or understated or, best of all, suppressed feeling. Over the last 38 years he’s made exactly two films that have really delivered in terms of upfront emotion — Alice Doesn’t Live Here Any More and The Last Temptation of Christ. He also runs into trouble when he does anything fanciful (like Kundun) or period (The Age of Innocence, The Aviator, Gangs of New York). Protest and stamp your feet all you want, but Scorsese’s home turf has always been (and always will be) contemporary northeastern urban crime movies and/or goombah relationship films. By this assessment his next effort, Silence, is going to be agony.

I’m not dumping on Hugo Cabret (the 3D aspect alone has my interest) but let’s keep expectations in check — that’s all I’m saying. Because (a) orphan movies are, boiled down, the cinematic equivalent of those children-with-big-eyes paintings and (b) Scorsese doesn’t really get “heartfelt.”