Opening weekend reviews don’t matter at all with most under 30s, and they probably don’t matter that much with the slightly or somewhat older female crowd that Warner Bros. is hoping will take a chance on Scott Hicks‘ No Reservations this weekend. Many of them will, probably, although it would be better for WB if they don’t consult the pic’s Rotten Tomatoes score. 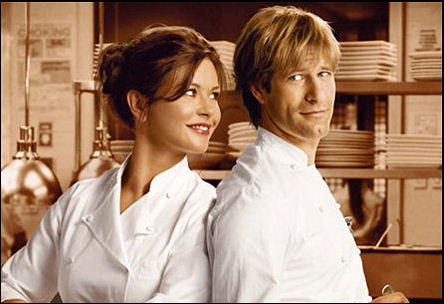 No Reservations has so far amassed a failing grade of 43%. Anything under 70% or 75% means trouble. Slip under 50% or 60& and you’re really in Shit City.
My favorite pan is by Newsday‘s John Anderson. My favorite graphs in his review are as follows:
“Like the planet-sized gourmand of Monty Python’s The Meaning of Life, director Scott Hicks‘ No Reservations consumes and regurgitates everything in its path: The career of Catherine Zeta-Jones, any credibility Hicks (Shine) still has, and even Aaron Eckhart, who is the new Jeff Bridges, one who can balance a caper in his cleft chin.
“Based on the popular German comedy Mostly Martha, it doesn’t leave a bad taste. It doesn’t leave much taste at all, save perhaps for the cloying echoes of Velveeta cheese. It’s a film that should come with bicarbonate.
“While food may be art, and a good chef an artist, an artist is all about his or her inner life — and Hollywood abhors the inner life the way nature abhors a vacuum. It requires far too much consideration, time and effort to make a convincing film about a creative soul, so what we get, particularly in No Reservations, is the equivalent of cream of mushroom soup and Ritz crackers.
“Which serve no one really well but enable the filmmakers to give us beautiful decor, beautiful people, beautiful apartments, New York City streets devoid of anything that looks remotely real and a Greenwich Village restaurant that closes on Sundays. Huh? Call Zagat’s!”