No Tickee, No Washee 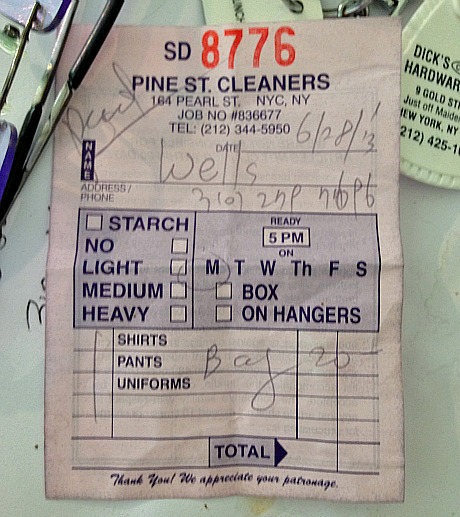 I’m mentioning this because a week ago I dropped off some laundry at a nearby dry-cleaning & laundry place in the dense, canyon-like environment of the financial district, where I’ve been flopping since 6.20. I put the ticket on the cupboard shelf where the plates and coffee cups are kept, and then two or three days ago it disappeared. I spent two long hours wandering around the district, trying to remember the name of the cleaners or at least where the place might be located. There are eight or nine cleaning establishments in this neighborhood, and they’re hard to find because my iPhone GPS doesn’t work very well with the super-tall buildings and narrow streets.

The day before yesterday I became convinced that I’d dropped the laundry off at Max Cleaners on John Street. I saw the sign and told myself, “This is it…yes! This is where my clothes are.” I went there this morning to claim my stuff and the Asian lady said, “No….no Wells…no phone numbah. You have ticket?” No, I can’t find it, I said. And then…no, she didn’t say “no tickee, no washee” but she definitely said something along the lines of “If you don’t have a ticket then I’m sorry but you’re more or less fucked.”

And then I came back, my head hung in despair, and it turned out that the lady of the house had put the ticket behind a box of biscuits. That’s okay, fine…at least I’d found the ticket! And you know what? Pine Street Cleaners was one of two places I was absolutely convinced I hadn’t dropped the stuff off with because the name rang no bells and is/was too close to our building. Go figure. 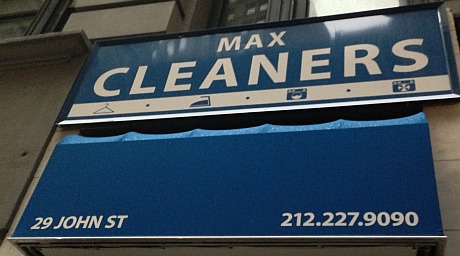