In an interview with The Guardian‘s Stuart Jeffries, Mamma Mia! star Meryl Streep has more or less said that the reason she’s starring in this new movie musical is because of the roundabout influence of Osama bin Laden and the 9/11 attacks. More particularly because of the effect that a matinee performance of Mamma Mia! on the Broadway stage had upon a group of 10 year-olds, including her daughter Louisa, not long after the attacks. 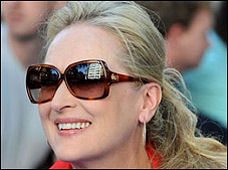 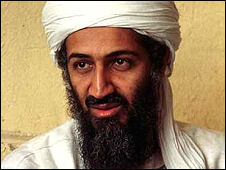 I knew there was unusual left-field reason why Streep would star in a movie version of an ABBA stage musical! I knew it and now it makes sense.
It was seven years ago and Streep “was in a bit of a pickle,” Jeffries writes. “She had to dream up an excursion for some friends of Louisa, the youngest of her four children by husband Don Gummer, the sculptor to whom she has been married for the past 30 years. Only one problem: it was October 2001 in Manhattan.
“‘Everybody was really dimmed spiritually after 9/11,’ Streep relates. ‘I thought, ‘What am I going to do with the kids?’ So I took all these 10-year-olds to see a matinee of Mamma Mia!. They walked in and they sat there with their heads in their hands. Dimmed is the word. They were sad all the time, you know?
“‘The first part was really wordy, and then ‘Dancing Queen’ started up. And for the rest of the show they were dancing on their chairs and they were so, so happy. We all went out of the theatre floating on the air. I thought, ‘What a gift to New York right now!’ She sent a thank you letter to the cast.”
And that opened Streep’s emotional receptivity door and down the road she was offered the part. In other words, Streep became a Mamma Mia! fan for the same reason that some journalists fell big-time in love with Amelie at the 2001 Toronto Film Festival — i.e., because it was shown right after the attacks and put them in a much better mood. Another way to put it is that Streep joined the Mamma Mia! team for the same reason that Ron Silver became a Republican. Oh…my….God!
“Isn’t this role beneath you?” Jeffries asks. “I’m not strategizing my career moves at all,” Streep replies. “I haven’t got a career that I’m building. When I swim my 55 laps, I try to remember the movies I’ve been in order, and I can’t…the past is just a miasma. There’s no career path.
“I just want to do things that are valuable to introduce into the culture,. This film [Mamma Mia!] is a valuable thing. I knew it when I saw it.”