No Funny, No Laugh

For me there’s one decent laugh in Horrible Bosses (Warner Bros., 7.8). And there are maybe 30 or 40 titters (i.e., faintly amusing material that doesn’t resonate or sink in because it lacks the antsy undercurrent of classic no-laughers like Greenberg). But at no time did the entire house at last night’s Arclight screening erupt in gales. Lone oddballs here and there would giggle (the guy sitting behind me wouldn’t stop) but the film clearly wasn’t connecting. That’s because of one thing and only thing only. It’s not good enough. 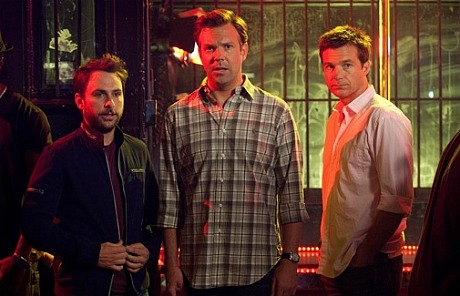 Okay, it’s not offensively bad by the downmarket comic standards of 2011. I’ll give it that much. The main performers — Jason Bateman, Jason Sudeikis, Charlie Day, Kevin Spacey, Jennifer Aniston, Jamie Foxx, Colin Farrell — give it the old nutso-gusto, and the script (by John Francis Daley, Jonathan M. Goldstein and Michael Markowitz) is loose and limber and raunchy and stupidly “fun” and director Seth Gordon keeps the ball in the air in a manner of speaking. Is this a reason to go see it this weekend? If you have little or no taste, yeah…I suppose. We’re living in grim-slide times so why not?

A lot of critics, not wanting to seem out of step with something dopey and inoffensively thin, are giving Horrible Bosses a pass. Except several have proven themselves completely untrustworthy as far as rating comedies go so forget the 85% Rotten Tomatoes rating that Horrible Bosses currently has. Too many critics are just going along. I don’t want to name names, but I know that some are throwing their hands up and saying “whatever” to themselves only to turn around and do pretzel contortions in order to write semi-complimentary things because they don’t want to seem overly cranky.

I’m different because I judge comedies not by 2011 standards (i.e., you can do or say any finger-up-your-arse, simian-impulse thing that comes to mind and if it sticks to the wall, no matter how coarse or phlegmy, it’s funny) but by classic Billy Wilder standards, which is that it has to be carefully and honestly and realistically written according to the laws of commonly-perceived human behavior, and it has to hold water in terms of plot and motivation and character in the same way that any dead-straight drama (Death of a Salesman, A Lie of the Mind, A Moon for the Misbegotten) has to hold water.

You can’t throw out the rule book because you’re making a “comedy”. Comedies aren’t that different from dramas — they’re just pitched differently and sprinkled with a kind of dust — and are much, much tougher to write and perform. Comedies need to be just as much about what people are facing in life — how they’re coping with loneliness and ambition and financial pressure and growing-up issues — as stage plays or dramas. They have to be real. They’re not excuses to light farts and flamboyantly goof off and just…whatever, go anywhere or try anything.

Men acting idiotically and fearfully while planning to kill bad bosses just isn’t funny. Sneaking into the homes of the would-be victims without wearing shoe gloves and hair bonnets and rubber surgical gloves is absolute idiocy and therefore not funny. Jennifer Aniston being hired to play a small business owner (i.e. a dentist) who’s an intemperate sexual predator in a dark wig and who flashes portions of her hot bod and risks years of struggle to get through medical school in order to satisfy passing fancy is degrading and ridiculous and not in the least bit funny. It’s doubly unfunny when the object of her lust is little male hygienist with a high-pitched voice (Day) who probably has a schlong the size of a rook on a chess board. I could go on and on and on.

I sat there like a tombstone, studying the screen like a cop studies a suspected felon during a late-night grilling at a grimy downtown precinct and not even tittering (okay, I inwardly tittered) until that one joke came along, which I really did laugh at. But even then I didn’t go “haaaah-hah-hahhh-hah-ahhh-hah…whoa-ho-ho…gee, whoo!” I just went “hah-huh.”