I’m sure John Wood was extremely grateful when he landed the part of has-been playwright Sidney Bruhl in the stage version of Ira Levin‘s Deathtrap, which opened in February 1978. For the dryly debonair and deliciously decrepit manner Wood lent to the role was so popular with everyone that he became a major character actor in Hollywood films through the ’80s and ’90s. The irony is that he never found a part in any Hollywood film that was as much fun to play (or watch) as Sidney Bruhl. Not one. Not even close. 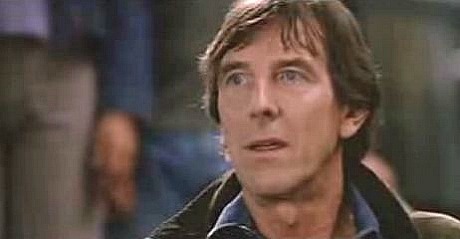 I know. I caught Deathtrap toward the end of Wood’s run (I think) in the late summer or early fall of ’78. By that time he’d given so many performances he was going a little batty. He was seized with concentration but also looked half-stoned. “I’m jumping off a proverbial cliff with this part and I don’t care because it’s so much fun….yaaahhh!,” he seemed to be saying. I remember noticing that he was half-muttering his costars’ lines — you could almost see his lips move. He was hamming it up for dear life. And when he said “nothing recedes like success” early in the play, he was brilliant. The audience loved him, applauded him. He was so confident, so alive, so cup-runneth-over.

And then the movies let him down. In the ’80s, I mean. A couple of minor flashes of flavor but that’s all. Somebody Killed Her Husband…forget it. Dr. Stephen Falken in WarGames…gimme a break with that running-around-in-the-cave scene at the end. The thin-lipped Deacon of Diction in Richard Donner‘s Ladyhawke…blah. All right, he was not only pretty good but fit the tuxedo in Woody Allen‘s The Purple Rose of Cairo. But then it was back to hell in Jumpin’ Jack Flash and then a mini-part in Mike Nichols‘ Heartburn. And then a supporting role in Lady Jane…okay, not bad.

The the ’90s kicked in and Wood started to get a little bit luckier. Archduke Karry in Orlando. A pretty good part in The Madness of King George. And then parts in Uncovered, Sabrina, Richard III, Jane Eyre and so on. And then he got older and started to slow down in the aughts He died in his sleep on 8.6.11.

Wood had been a Shakesperean stage actor for a little less than 30 years before doing Deathtrap, and I’m presuming he was quite content with his work and life during the ’50s, ’60s and ’70s before Levin’s play came along. I’m sure his accountant was very happy with Wood’s post-Deathtrap income, and I’m sure Wood was pleased as well. If only he could have landed one killer movie role, just one. 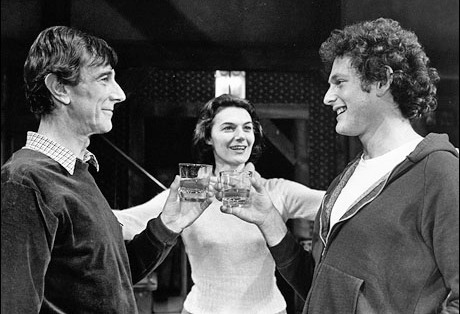