Nothing Sadder Than To Have Recently Peaked

[Posted on 11.22.18] When I watch Cary Grant in North by Northwest I’m always aware this was his crowning big-screen moment of the ’50s, his last great role and the last film in which he could make a case for looking late 40ish and perhaps a suitable sexual partner for Eva Marie Saint (he was 54 when Alfred Hitchcock shot NXNW in ’58 — she was 34), and after this he was more and more the silver fox and starting to go gently downhill with grace and elegance (nobody believed he was an appropriate romantic match for Audrey Hepburn in Charade) but heading there regardless, and of course destined to retire by the mid ’60s. So North by Northwest was really the last shining moment of his career…the last VistaVision moment when everything was truly in place. 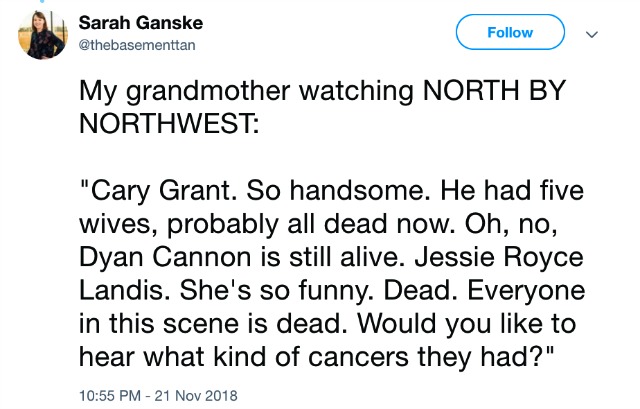 “All Downhill From Here,” posted on 8.7.13: If Gregory Peck had been clairvoyant and under the influence of a truth drug on the night he won the Best Actor Oscar for To Kill A Mockingbird in March 1963, he might have said, “Well, this is it…the peak moment. I’ve been lucky enough to play starring roles for the finest producers, directors and writers in the business for the last 18 years…Spellbound, Duel In The Sun, Gentleman’s Agreement, The Paradine Case, Twelve O’Clock High, Roman Holiday, The Man in the Gray Flannel Suit, Moby Dick, The Bravados, The Big Country, Pork Chop Hill, On The Beach, The Guns of Navarone, Cape Fear…and it’s been wonderful.

“I’m saying this because for the next 40 years it’s going to be all downhill. Oh, I’ll make a few interesting films over the next couple of decades but my charmed career period is over and I know it. Some actors only get lucky for ten years or so. I nearly had 20. And for that I’m very grateful to the industry and especially to the public. From the bottom of my heart, thank you.”

February 5, 2022by Jeffrey WellsNo Comments
« Previous post
I Have A Problem
Next post »
That Mid ’90s Alchemy