Nothing to do with “agoraphobia”

Alejandro Amenabar, director of The Sea Inside (winner for the ’05 Best Foreign-Language Oscar) and The Others, is about to begin filming Agora, an historical epic starring Rachel Weisz. They’re kidding, right? A title that means absolutely nothing to anyone except ancient-history scholars? Did I not just quote Jack Lechner‘s observation that one should never choose a title that’s “incomprehensible until you see the movie, but not intriguing enough to make you want to see it”? 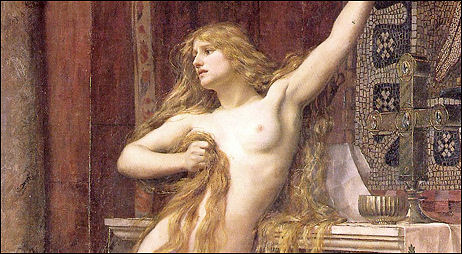 An 1885 painting of Hypatia by Charles William Mitchell.

Weisz will play Hypatia of Alexandria, a mathematician, astronomer and philosopher of ancient Egypt. The story will be about the religious revolts of Roman-ruled Alexandria, where Hypatia battles to save the wisdom of the ancient world contained in the city’s famous library. Agora will also star Max Minghella, Rupert Evans and Michael Lonsdale.
If anyone’s interested and not concerned with spoilers, consult the Wikipedia page about Hypatia and scroll down to the portion that describes her death. Echoes of Braveheart; not for the squeamish.