It’s my sad duty to report that N.Y. Times critic Manohla Dargis, always a thoughtful and delicious read, has more or less sided with the “where’s the beef?” critics of Steven Soderbergh‘s Che. 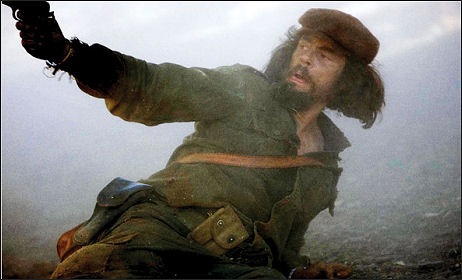 “Divided into two sections — once called The Argentine and Guerrilla — the now monosyllabically titled Che tracks the guerrilla leader over mountains and through his tactical successes in Cuba before moving on to his catastrophic bid to bring revolutionary socialism to Bolivia,” she writes. “The movie has been described as dialectical, but two parts do not a dialectic make: something meaningful has to happen between those parts.”
I’m shaking my head as we speak. “Something meaningful” does happen in Soderbergh’s film. It’s just that it’s spread evenly over the 257-minute length. The fact that it’s not ladled out in carefully shaped and timed payoffs (generally referred to as dramatic highpoints or “movie moments”) is what constitutes, for me, the profound plain-deal dignity of it.
The “something” that Manohla can’t see for the trees is that you’re genuinely, atmospherically there with Benicio del Toro’s Che Guevara and his scrappy jungle rats through all manner of thick and thin. The music in Soderbergh’s film is mostly low-key, but it builds into a symphony of often breathtaking realism that sinks in deeper and deeper the more you reflect upon it.
Fug it — I’m going to see Che again (for the third time) at the Saturday, 11.1.08 screening at the big Mann’s Chinese theatre (the one that’s been there since the 1920s) in Hollywood. And I’m buying the DVD. 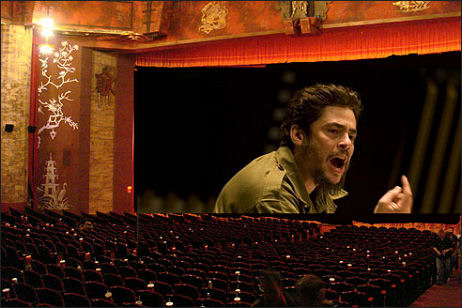 “Throughout the movie Mr. Soderbergh mixes the wild beauty of his landscapes with images of Che heroically engaged in battle, thoughtfully scribbling and reading, and tending to ailing peasants and soldiers,” Dargis observes. “Che wins, Che loses, but Che remains the same in what plays like a procedural about a charismatic leader, impossible missions and the pleasures of work and camaraderie — Ocean’s Eleven with better cigars.
I love this part of her review, though:
“Like that glossy, glistening bauble of a film, Che seems to me very much a self-reflexive endeavor, a movie not just about two revolutionary campaigns, but also about the struggles — logistical, emotional, psychological — of moviemaking itself. (To push this analogy further, Mr. Soderbergh’s first feature, sex, lies, and videotape, is his Cuba — an act of youthful will and the spark that ignited a movement — while his second feature, a stubborn folly called Kafka, could have been his Bolivia.)
“Mr. Soderbergh cagily evades Che’s ugly side, notably his increasing commitment to violence and seemingly endless war, but the movie is without question political — even if it emphasizes romantic adventure over realpolitik — because, like all films, it is predicated on getting, spending and making money.”