Sorry to be the bearer, but Ocean’s Thirteen (Warner Bros., 6.8) is nothing to drop your socks for or go “hell, yeah!” about. I just came out of the 11 a.m. Cannes press screening, and my reaction was that flat-hand gesture where you kind of wiggle it and go “okay, yeah… meh.” 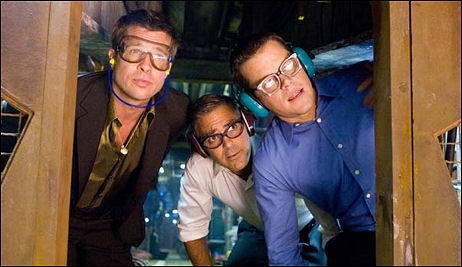 No journalist I’ve spoken to thus far is doing cartwheels over this thing. No, take that back — one major-publication guy thought it was better than Ocean’s Twelve. But then I have fairly skewed tastes (I found the Julia-Roberts-pretending-to-be-Julia Roberts bit in that Rome hotel hilarious), so maybe the mainstreamers who derive a part-of-the-crowd comfort from the mere act of watching a big-studio franchise movie (the content being another matter entirely) will get off on it.
Update: Here’s Todd McCarthy‘s Variety review, which is pretty favorable.
I didn’t hate Ocean’s Thirteen — I smiled at times and came out shrugging. It rolls along and gets fairly intricate at times and does the expected rabbit-trick thing. But the first half is on the boring side. (Saying that something “is on the boring side” is a chickenshit way of saying it’s boring.) Set-up, set-up…exposition, exposition. No real juice or laughs early on — only mild amusement.
The second half is “fun” here and there (there’s a total dropout moment when Clooney and Brad Pitt‘s character stop for a second to watch a house giveaway on Oprah and…okay, no spoilers) but, as a friend just wrote, “it doesn’t remotely make-up for the failure of the first [half].”
This being a revenge story, you obviously have to compare it The Sting. It wold be derelict not to. And in terms of enjoyment, charm, great bits, laughs, snappy dialogue, tension-suspense and fakeout moves, it doesn’t even come close. I wish it were otherwise. This is not to say that Steven Soderbergh‘s third (and hopefully last) Ocean’s film stinks. It doesn’t, but the overall after-vibe is one of those lukewarm deals.
How good is Al Pacino‘s Willie Banks, the Robert Shaw/Doyle Lonnegan of the piece? The part isn’t really there in terms of depth or pizazz, so Pacino doesn’t have much to play. Ellen Barkin plays Pacino’s right-hand assistant, and ..well, she’s spirited. You know how the other guys are.
I’m sitting in the Salle du Presse waiting for George Clooney and the gang to show up (the festival goons let the journalists in 45 minutes ago, and the Thirteen crew won’t show for another 20 minutes) minutes from now!).
“Why the hell did they need to do this one?” a friend just asked me. To make money, obviously, and to help keep the Soderbergh-coolness ball in the air and to balance out the losses of his little arty films. That’s a fair and necessary equation, and for the sake of this I hope Ocean’s Thirteen does as well as the first two.