Two days ago the Winnipeg Free Press‘s Randall King reported that Guy Maddin, the indie-minded, David Lynch-ian Canadian filmmaker known for his quirky oeuvre, will marry film writer and Sunset Gun columnist Kim Morgan. This seems to me like a symmetrical mating of the souls — they’re both visionary eccentrics — and it’s a nice May-December thing besides. Maddin is 54, and Morgan is an early thirtysomething (I think.) 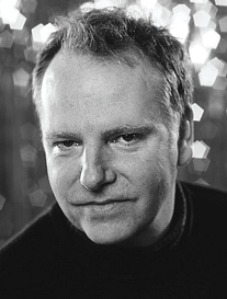 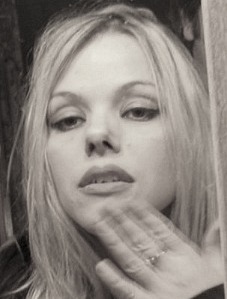 When’s the last time a film blogger even went out with a respected filmmaker, much less got engaged to one? What does this engagement say about the standing of film bloggers in the overall social-professional sphere, if anything? What would people say if, for example, Kris Tapley elbowed Mark Boal out of the way and got engaged to Kathryn Bigelow after playing a small role in The Hurt Locker? Or Isabella Rossellini, say? They’d say, “A little weird, a little curious…but at the same time kinda cool.”

Morgan is a very bright critic, a deeply emotional writer and also an iconic “personality” known for her smoldering-hot-blonde photos on her website and Facebook page. She became a “brand” and did an episode of At The Movies with Richard Roeper, and was treated patronizingly by him, and — according to quotes in King’s article — attracted Maddin’s sympathetic attention.

“Maddin, 54, confirmed he will be marrying L.A. film critic Kim Morgan in Winnipeg in the near future after news of the betrothal was revealed in a tweet by film critic Roger Ebert.

“‘Ebert got a bit ahead of us,’ Maddin said. ‘But we’re engaged and we’re going to get married soon, and the rest, I’ve got to keep some of it a secret. Because that’s the spirit of it. It will be absolutely private.’

“‘It would have been nice if it had been tweeted just after it happened.’

“Maddin and Morgan fell in love when he flew her to Winnipeg this summer to star in his film Keyhole (in which she plays Udo Kier‘s gun moll) and in the short films Hauntings.

“The director has been married once before, but has been divorced, he says, for 32 years.”