Celebrated in international markets as the steel-abbed action hero most favored by submental cretins, Jason Statham has demonstrated time and again his commitment to B-grade action fare. (The only exceptions have been Roger Donaldson‘s The Bank Job — easily Statham’s best — and that brief cameo in Michael Mann‘s Collateral.) Here’s an office-chat interview with MTV.com’s Josh Horowitz in which Statham talks aout Redemption (a.k.a., Hummingbird), which some are describing as a cut (or at least a half-cut) above. Pic opens on 6.28. 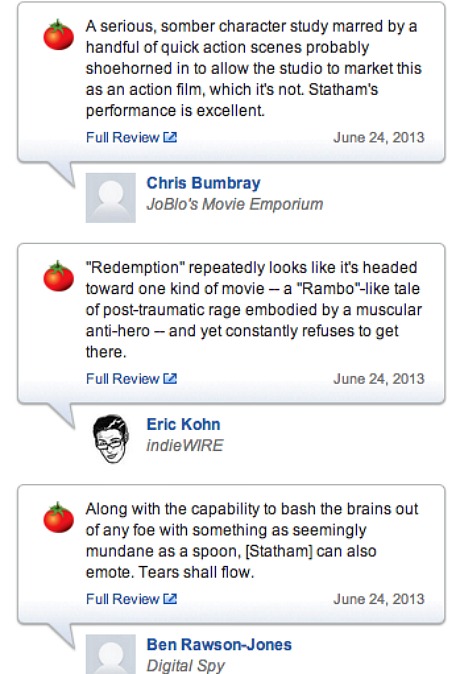 “Statham is a working-class Brit with a sports background (diving) and not much education, and one result is that he seems to lack not only good taste but any kind of longing to acquire it, and therefore a semblance of class. He seems to regard action-movie acting as a ticket to wealth and power, but he doesn’t seem to understand what true aesthetic coolness is.

“If Statham makes too many crap movies, he’ll eventually lose his lustre and magnetism. He’ll be bruised fruit.” — from an April 2013 piece called “Agony of Statham.”