On 12.2.09 Cinematical‘s Monika Bartyzel, following-up on a Variety announcement, reported that Paul Thomas Anderson and Philip Seymour Hoffman would be teaming up for a new flick “about a man who creates his own religion.” The feature would cost in the vicinity of $35 million with Hoffman playing “the Master,” an L. Ron Hubbardish figure “who starts a faith-based organization in the 1950s. He teams up with a twentysomething drifter named Freddie who becomes his lieutenant until the kid finds himself questioning the faith he’s gotten himself involved in.” 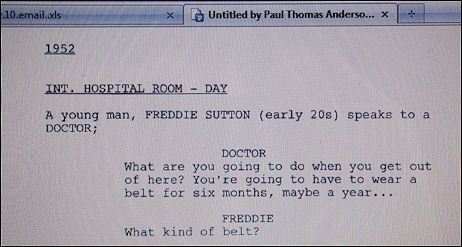 In its announcement story, Variety wrote that “the drama does not so much scrutinize self-started churches like Scientology or the Mormons, as much as it explores the need to believe in a higher power, the choice of which one to embrace and the point at which a belief system graduates into a religion.”

That’s a smokescreen statement. I was sent a copy of PTA’s untitled script yesterday and while I haven’t read all of it, it sure reads like a Scientology critique to me. I’m particularly thinking of a line near the end in which Hoffman’s “Master” presents a contact that he wants Freddie to sign that stipulates he “will serve the Cause above all other laws and regulations in this or any other neighboring galaxy for three billion years.” That sounds kinda Hubbardy…no?