Beloved Supreme Court Justice Ruth Bader Ginsburg is gone, and with her any chance of at least a semblance of moderate temperance on the court. I was praying so hard that she would hold on for another five months or so, or until Joe Biden‘s hoped-for inauguration on 1.20.21 along with a distinct possibility that the balance of Congressional power in the Senate might tip in favor of sensible liberal allegiance.

Now the Supreme Court will be six-to-three in favor of conservatives. The ballgame is more or less officially over for many years to come with three Trump friendlies on the bench. 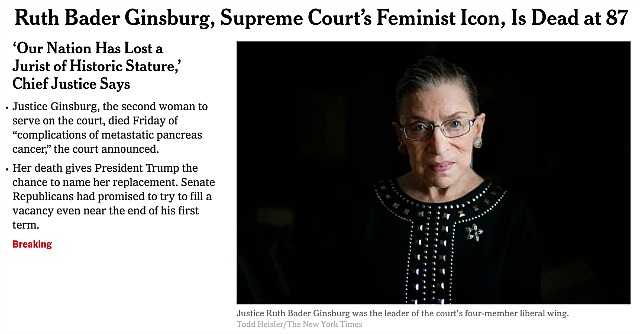 Vox: “Justice Ginsburg died believing that Trump is an ‘aberration.’ Her death ensures that he won’t be.”

I recall reading about an alleged discussion between President Obama and Justice Ginsberg, apparently beginning in 2014 or thereabouts, in which Ginsburg might have retired before the end of Obama’s second term and thereby allowed him to nominate a moderate liberal replacement before his term ran out. Ginsberg’s response was essentially “no way, I’m good, forward march.”

Judicially speaking the rights of the Democratic majority in this country and particularly women, anti-corporatists and people of color are now going to be under severe strain for the next 10 to 15 years, at least. The pooch is really screwed.