The problem with Baby Mama is that Tina Fey should have written it instead of director Michael McCullers. I say this presuming that Fey wrote some of her own dialogue (just as I know she wrote “bitch is the new black” for that SNL Hillary skit), but the film, I suspect, would have been at least 50% better if McCullers, who directs Baby Mama with the steady but cautious approach of a 68 year-old chess player, had just removed himself period. The writing feels reined in, conservative, middling. 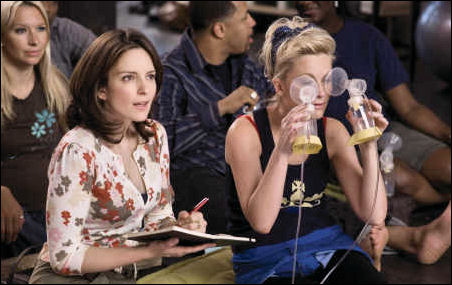 I’m not going to pass along the plot particulars. Everyone knows them from the trailer, or you can always read the Wall Street Journal‘s Joe Morgenstern or..well, anyone.
I seriously hate the careful, tidy, corporatized vibe of big-studio comedies that have been directed by veteran hacks in their getting-on years. You know…guys from the Adam Sandler, Austin Powers or SNL talent families looking to please their clueless corporate employers so they can cover their various loans. The result are always films that seem utterly alike. Smart but never clever, well acted but lacking that lift-off feeling, pleasantly shot, predictably plotted. Smooth, professional-level swill.
Except for two or three mild titters (which are less than chuckles and nowhere close to guffaws), I watched Baby Mama with the face of Ramses as he looked upon Moses. Maybe Fey should have directed as well. She’s a real-life superwoman — why not?
The irony is that I didn’t hate Baby Mama despite all this. I stayed with it (i.e., I didn’t walk out, which is a signficant thing in my book) because of Fey. I’ve had this…you know, mild thing for her since her SNL days. It has something to do with the glasses and the semi-conservative dark haircut and…I don’t know. Smart women turn me on, and on top of this Fey reminds me of my girlfriend. The difference is, my girlfriend loves Obama. 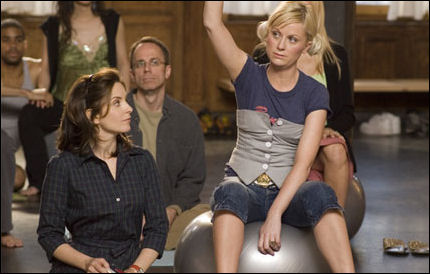 I didn’t think Amy Poehler was all that believable as a commoner. She seemed to be “playing” the part every step of the way, which is not an impression most actors want to convey. Dependable Gregg Kinnear is fine as the predictably nice boyfriend who owns a struggling independent Jamba Juice-type store.
Tom McCarthy, the director of The Visitor and The Station Agent, has a short bit as a guy out on a dinner date with Fey. His character is quickly overwhelmed by Fey’s frank talk about wanting a baby before she gets too much older., etc. He excuses himself to go to the bathroom but is seen jumping into a cab 10 seconds later. The scene isn’t funny because McCullers, shmuck that he is, has directed McCarthy poorly. Any guy looking to run away from a dinner date would be hugely ashamed of himself, and would therefore do his level best to convince the woman in question that he really does need to take a leak, so he can get away clean. McCarthy doesn’t do that — he’s lying with pathetic obviousness. And the escaping man would certainly never look at the his abandoned date through the restaurant window as he jumps into the cab. If anything, he would pointedly look away so as not to confront his own cowardliness.
Baby Mama is tepid and lame. It’s not even a DVD rental. It’s a 35,000 foot altitude plane-watch thing.