McCain lite is a pretty good retort to Hillary right now. So is “what the hell did she really actually do during the ’90s that involved 3 am courage”? So is “where are her tax returns”? For anyone with a modicum of perspective, the fact that Clinton is not only willing but eager to play it butt-ugly and burn the house down in order to take the Democratic nomination is ample damnation. 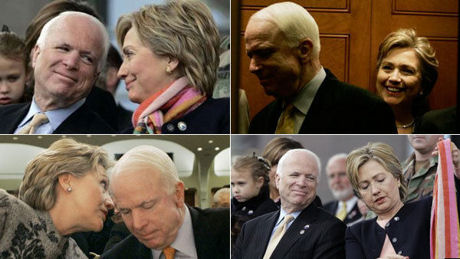 The dynamic will change — it’s already changing — but I can’t shake this godawful sensation I have in my stomach that Pennsylvania’s Reagan Democrats have bought into the fear card that Hillary has thrown into the center of the table, and that the die is cast The older white women love her, and their shlumpy husbands — in Pennsylvania and perhaps elsewhere — may be thinking it’s better to have a combative battle-axe with a fierce glare and puff-bags under her eyes than the other guy with a new, turn-the-page hymnbook.
It’s awful — a downer of massive proportions — but Obama is in a situation now and something has to happen. He has to somehow get it on with the Pennsylvania lowbrows and make the vote in their state close…or there may be trouble. He has to at least keep a strong edge in the overall popular vote or certain spineless superdelegates could fold and Clinton could storm the convention and make a tough case, despite the delegate math that she can’t win on.
God save us from the timidity, sluggish thinking and pathetic malleability of the Dunkin’ Donuts Democrats.
Is there not a certain analogy between the older white women who are standing by Hillary and the “downtown” jury that found O.J. Simpson not guilty in his 1994 murder trial? Did the mostly African-American jury not set a murderer free out of logic-free loyalty because they felt they had to stand by a black man in order to defy, for once, decades of prejudicial handling of African American defendants by a one-sided justice system? What is the difference, deep down, between this and millions of older women standing by Hillary despite her contentious cat-scratch vibe and monstrous negatives that will give not only pause but indigestion to millions of voters in the general election out of a sense of profound loyalty to a woman candidate, regardless of her brief?