Once Upon A Time

Watch this trailer for Uli Edel‘s The Baader Meinhof Complex and tell me it doesn’t look like an exciting, tough, complex “ride” movie, and not just some dense political drama. Based on the book by Stefan Aust, it’s about the infamous German terrorist group behind all kinds of bombings, killings, robberies and kidnappings in the late ’60s and ’70s. 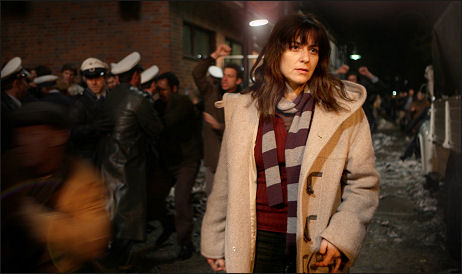 The word on the film has been iffy ever since Constantin Films and its German p.r. agency, Just Publicity, tried to threaten German and other European critics with heavy fines if they reviewed or even spoke about The Baader Meinhof Complex prior to an embargo date of 9.17.08 (for the film’s 9.25 German and Austrian openings).
And yet I’ve been told by a buyer-distributor whom I know and trust that Edel’s film is better than pretty good.
And the top-notch all-German cast, he says, is totally killer — Martina Gedeck, Moritz Bleibtreu, Johanna Wokalek, Bruno Ganz, Simon Licht, Jan Josef Liefers, Alexandra Maria Lara, etc. And yet The Baader Meinhoff Complex didn’t show at the Toronto Film Festival, and the Telluride Film Festival’s Tom Luddy wasn’t even shown it for possible consideration.
And although It’s opening in Europe this fall, starting in Germany and Austria ten days from now, Baader Meinhof has no U.S. distributor and the people at Summit Entertainment, who are said to be handling int’l (and, for the time being, domestic) sales for Constantin Films, which produced the film, haven’t returned calls all day. I spoke to Summit’s corporate spokesperson Paul Pflug, but that didn’t go too far because he’s not in the loop. 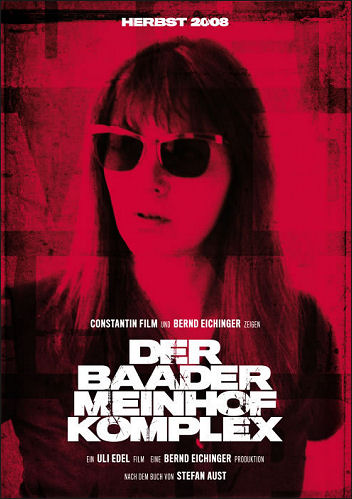 The trusted buyer, a “name” guy who saw Baader Meinhof last spring before Cannes, said “it’s amazing….a really good movie with crazy details that I didn’t know about. A huge expensive action movie with a great cast [so good that] you want to hire all of them. But because it’s in German and because of the tough lefty politics of it…and maybe because Americans won’t understand the context or because they may be turned off by the politics and the exotic ’60s climate, the buyers are skittish.
The Baader-Meinhof gang “had public support and manipulated the German government from their jail cells…they were vicious. There’s a great scene when they go to train with the early-on Middle Eastern terrorists, except the Baader Meinhof gang is very much into the ’60s commune ideals and so there’s a culture and values clash.”
All I know is that I would have made a point to see this film at Toronto, and it wasn’t even there. I would love to see it right now and write about it and maybe nudge the buzz along, but the Summit people won’t pick up the phone. Constantin’s Bernd Eichinger is said to be concerned and perplexed that he can’t sell The Baader Meinhof Complex to a U.S. distributor, but nobody stateside seems to be doing very much about it. Or at least, not so you’d notice.
Are they (Constatin plus whomever would like to distribute) planning a Sundance opening and an early ’09 opening? One can only guess. 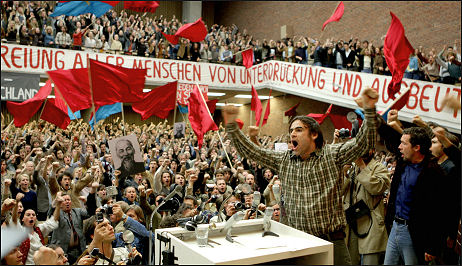 Update: A letter from Richard Huffman, webmaster of a first-rate Baader-Meinhof site, came after I published earlier today.
“I wanted to follow up with you on your story about the Baader-Meinhof movie,” he began.I “n addition to being a major Jeff Wells fan, I happen to have the odd distinction of being one of the world’s leading experts on the group (you can visit my site at www.baader-meinhof.com). I am personally interested in seeing this film because West German terrorists targeted my dad when he was serving at the head of the US Army’s Berlin Bomb Disposal unit while the Baader-Meinhof Gang was active.
“Anyway, I can tell you that the story of this group is stunning and as cinematic as one could possibly imagine. One of Germany’s leading journalists decides to leave her kids and and life to become a terrorist. A group dedicated to violent revolution that actually had the support of up to 20 percent of the German youth, and which brought about a horrible bombing campaign that maimed and killed dozens of Americans and Germans.
“As someone who has studied this era in amazing detail; watching clips from this movie sends absolute chills down my spine. it’s like looking through a time machine.
“If you go to my homepage you’ll see a brief clip from a history channel documentary that myself and Baader-Meinhof Komplex author Stefan Aust appear in from last year about the group.”