Hats off to that exceptional missing-arm effect in Christine Jeffs‘ Sunshine Cleaning, which I saw last night for the very first time, having missed it at Sundance ’08. It’s a teeny bit mystifying as to why the nice-guy character, played by Clifton Collins, Jr., has a missing left arm, but that’s the deal. I’m just trying to pat some folks on the back. 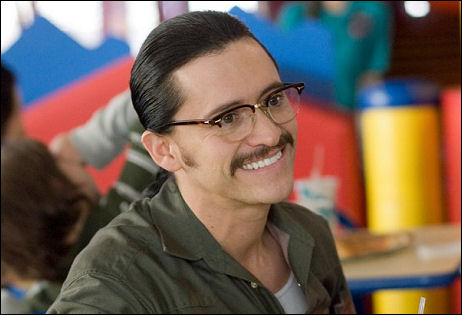 Sunshine Cleaning costar Clifton Collins, Jr. It appears in this still that his left arm is attached.

This is my kind of visual effect — i.e., the kind that doesn’t look like one and which nobody has even mentioned so far. (Or at least, in the reviews that I’ve read so far.) To make it happen the visual effects guys, I’m sure, had to carefully cover Collins’ left arm in a bright green sock so as to erase it without a speck. It doesn’t look like anything at all.

Why did Jeffs remove Collins’ arm in the first place? Beats me. It doesn’t matter one way or the other story-wise. There’s a character stroke when we learn that Amy Adams, who plays the lead character, finds Collins attractive despite the handicap, but it’s really not an important point to make. Okay, so she can see past the handicap issue…great.

I’m wondering because Sunshine Cleaning (which isn’t too bad, by the way) must have made for a modest price, and the producers must have shelled out a fair amount of money, I’m guessing, to get the arm thing right. Am I wrong about this? Is it relatively inexpensive to take arms off these days? I remember how impressed I was when Gary Sinise turned up with a very convincing missing leg in Forrest Gump. That was 14 years ago.