One That Got Away

Oliver Hirschbiegel‘s currently rolling Caught in Flight is about the two-year affair between Princess Diana (Naomi Watts) and Dr. Hasnat Khan (Naveen Andrews), a British Pakistani heart and lung surgeon described by friends of the late princess as the alleged “love of her life.” 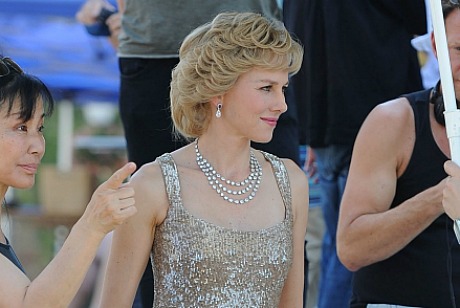 Naomi Watts as Princess Diana in Caught in Flight.

Khan broke it off in July 1997, and Diana more or less went straight into the arms of another eastern sort, Dodi al Fayed, albeit one of a much lower level of character and accomplishment.

I was asked to write a long file about Fayed when I was working at People in ’97. After making calls and taking notes for three or four hours, I knew he was basically trash — a spoiled son of a rich man, a guy who didn’t pay his gardener bills. And yet Diana chose him to be her boyfriend. That told me a lot about her. The truth is that she was not an especially bright woman. I’m sorry but a truly wise and perceptive lady wouldn’t have said boo to an asshole like Fayed, much less become his girlfriend.

One presumes that somebody will play Fayed in the film…or perhaps Hirschbiegel will skip that whole final chapter in her life, depending on our knowledge of same and letting the sadness of her affair with Khan not working out speak for itself. But you know nine out of ten people who will pay to see Caught in Flight will want to see a depiction of her final night in Paris with the car slamming into the pole, etc.

The screenwriter of Caught in Flight is Stephen Jeffreys.