I’ve just spoken with Gold Derby‘s Tom O’Neil about the likely award-season strategies for The Help‘s Viola Davis and Octavia Spencer, and he’s convinced me that Disney is going to push Davis as Best Actress and Spencer as Best Supporting Actress. 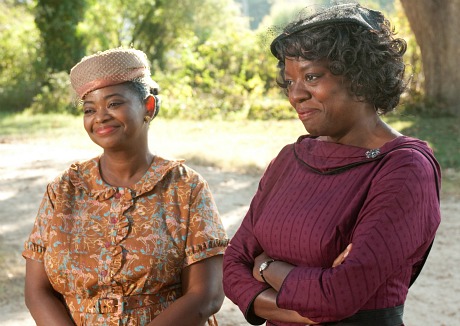 As O’Neil partly says in a recent “Awards Tracker” article, Spencer has the best shot at winning between the two because she’s playing an impudent back-talker and that this is the kind of performance — spunky, spirited — that tends to win in that category.

“They have to split up those two maids,” O’Neil said a few minutes ago. “And Davis is not the sort of actress who at this stage in her career, after winning a Best Actress Tony award for Fences on Broadway…she will not will accept sitting at the back of the bus.

“In Fences she took a role that Mary Alice had won a Best Featured Actress Tony for in 1987…and then the same play comes back in 2010 and her reps pushed for Davis to be nominated as Best Actress…they peititioned the Tony committee to change their minds, and they did change their minds and Davis won. That is why we know she’s not going to accept a Supporting Actress campaign for The Help.

“So she’s not going to go for a Best Supporting run anyway, and this works out because that way the two maids won’t be running against each other and possibly cancelling each other out.”

But Davis’s role in The Help isn’t a lead, I told O’Neil. It’s basically a strong supporting part about a woman who doesn’t drive or instigate the action (i.e., the writing of a book about maids in Jackson, Mississippi circa 1963) but who stands up for herself in a strong, dignified way. So why campaign Davis as Best Actress if (a) she’s not delivering an unmistakably lead performance, (b) if people are thinking, rightly or wrongly, that she’s playing a supporting role, and (c) if the likelihood of Davis winning over Glenn Close or Meryl Streep in their respective lead roles in Albert Nobbs and The Iron Lady, is not that high?

“Because they dont give a fuck,” said O’Neil. “This is about splitting up Davis and Spencer and putting them into different acting categories and about what Davis will and won’t accept. It’s about stature and status and politics…it’s highly unlikely that Davis will accept a Best Supporting campaign, and it’s not in anyone’s interest to have Davis and Spencer run against each other.”

“I know this is what they want to do,” said Deadline columnist Pete Hammond, referring to the split-up scenario, “but the bottom line is that Disney has to see what the actors branch says.

“Obviously they don’t want Davis and Spencer in the same category. This is an ensemble cast in The Help, and running actresses against each other used to be done all the time, like when they ran Debra Winger and Shirley MacLaine for Best Actress in Terms of Endearment, but these days the studios feel it ruins their chances to actually have a win, so they’re going to want to split them up.”

A couple of days ago I was told by a friend that a Disney publicist had said following a recent Academy member screening of The Help that they want to run both Davis and Emma Stone as Best Actress…maybe. But then I was told this decision hasn’t yet been firmed.

Hammond offered some historical perspective. “Remember that Susan Sarandon‘s performance in Atlantic City (’78), which even she thought belonged in the Best Supporting category, wound up being nominated for Best Actress,” he said. “And Patricia Neal won a Best Actress Oscar for her performance in Hud even though it was arguably for a supporting role, playing a maid.”