Roughly three months hence Eureka Video will release a Bluray of Orson Welles‘ Touch of Evil (1958) with six different versions of the film, which really amounts to three versions presented in both 1.37 and 1.85 aspect ratios. One, the 96-minute 1958 theatrical version. Two, the 1958 preview version that runs 108 minutes. And three, the 1998 reconstructed version, running 112 minutes, that was put together by Walter Murch, Bob O’Neil and Bill Varney. 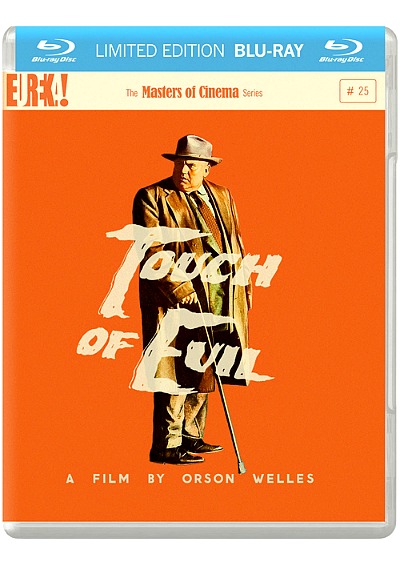 Two aspect ratios for each version…so hardcore, so film-nerdy. But the orange backdrop is, for me, a problem. To advertise a revered classic film taking place in a Mexican border town and shot in the gritty environs of Venice, California, Eureka chose one of the most needlessly intense and eye-sore-ish colors in the spectrum? A color that says traffic cones and prison jump suits?