“The words ‘director’s cut’ on the cover of a DVD usually mean a few more minutes of gags too coarse to make the R-rated version shown in theaters,” N.Y. Times columnist Dave Kehr begins in a review of an unusual DVD release. “For the DVD release of his 1976 Nickelodeon, Peter Bogdanovich has done something different. The director’s cut is indeed a few minutes longer than the theatrical version (both are included on the new disc from Sony Pictures Home Entertainment), but more conspicuously it’s a black-and-white edition of a film originally released in color. 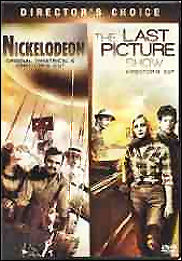 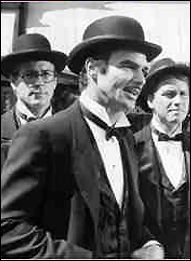 “Black and white had been Mr. Bogdanovich’s original choice for Nickelodeon, a comedy about the early days of American filmmaking that drew on Mr. Bogdanovich’s interviews with pioneering directors like Allan Dwan and Raoul Walsh. But even though Mr. Bogdanovich’s black-and-white films, The Last Picture Show (1971) and Paper Moon (1973), had been commercial and critical successes, monochrome was increasingly frowned upon by the studios.

“Even in color, though, Nickelodeon found little favor. The story follows two men from different backgrounds, Ryan O’Neal as Leo Harrigan, a Chicago lawyer who becomes a writer and director, and Burt Reynolds as Buck Greenway, a Florida pitchman who becomes a star. Many viewers found the film too broadly farcical in its first act and too darkly melancholic in its last, when the men’s friendship is tested by their mutual attraction to a wide-eyed young actress, Kathleen Cooke (Jane Hitchcock, a last-minute substitute for Cybill Shepherd, Mr. Bogdanovich’s protege.)

“In black and white Nickelodeon is obviously more true to its subject, and it has unexpected emotional effects as well. The broad farce and physical comedy of the first half seem less hysterical and eager to please, and the conflicted emotions and encroaching sense of lost innocence in the second half (a pattern followed by many of Mr. Bogdanovich’s films) seem more substantial and plangent.

“The director’s version wasn’t created simply by turning down the color knob: it’s the result of substantial work by Mr. Bogdanovich, the cinematographer Laszlo Kovacs (who died in 2007), the colorist John Dunn and Grover Crisp, the executive in charge of maintaining the Sony/Columbia library. Each shot was re-evaluated and retimed for black and white, using both traditional photochemical processes and new digital tools. It’s particularly striking how much more detailed and expressive the interior sequences appear.

“And as the movie becomes more and more nocturnal, approaching its somber, portentous ending, there is a new sense of emotional darkness devouring both the characters and the image.

“Here is one director’s cut that isn’t merely more of the same, but something substantially different and palpably superior. Nickelodeon now seems a much closer cousin to The Last Picture Show, which is also included this two-disc set, in an excellent new transfer.”