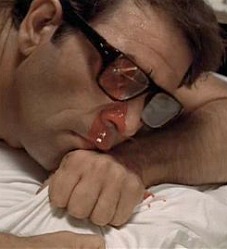 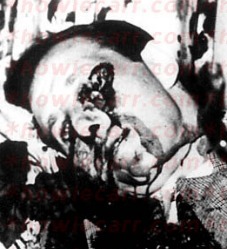 (l.) the corpse of Moe Green in Francis Coppola’s The Godfather; (r.) one-eyed Bugsy Siegel on the couch after his 1947 murder.

“The photograph, according to sources who have seen it, is bloody and gruesome with a bullet wound to his head above his left eye,” Tapper writes.

Wait…above the left eye? I read yesterday that OBL was hit dead smack through the eye like Moe Green and Bugsy Siegel. Have we been lied to again?

You need to prove to the skeptics that Osama bin Laden is dead-dead-dead with the above-described photo (sharply focused, radiant red color, brightly lit), with video of his body taken after the killing, with video of the funeral at sea, with print-outs of the DNA proof…with everything.