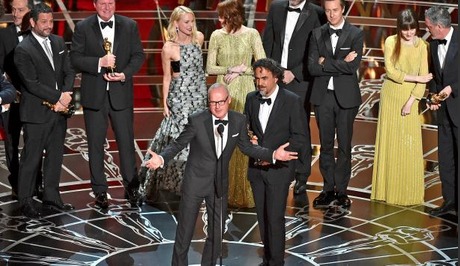 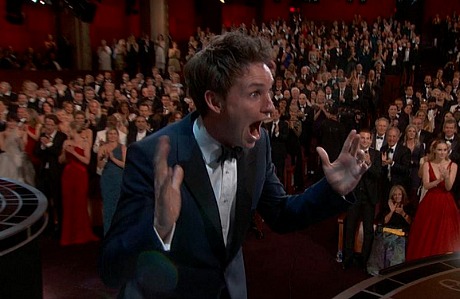 7:09 pm: Zoe Saldana and Duane Johnson presenting Best Animated Feature Oscar. The expected winner is How To Train Your Dragon 2, and the winner is Big Hero 6. The evening’s first surprise! I didn’t like Big Hero 6, by the way.

7:06 pm: Anna Kendrick and Kevin Hart presenting Best Animated Short Oscar to Feast. Which I hated, by the way. I called it “basically a corporate advertisement for the joys of junk food. It is one of the most odious and gastrointestinally irresponsible animated films ever made. Feast is basically about a lovable pooch, Winston, and his beefy owner bonding through the junk-food meals they share (pizza, french fries, nachos with cheese, burgers, garlic bread, pasta and sauce-covered meatballs), and how their relationship hits an impasse when the owner falls for a thin lady who’s into lean cuisine and who places sprigs of parsley on every dish she prepares. Winston is miserable about being deprived, of course, but he feels his master’s misery when the girlfriend leaves. But the couple eventually gets back together and then — deliverance! — Winston’s bliss is restored when a new baby comes along and starts feeding him crap again. Imagine the outcry if Disney was to make a short about a junkie and his dog who both love heroin, and about a girlfriend who comes along and gets the owner to kick and clean up, which makes the junkie dog miserable but then — hooray! — a baby pops out and is soon giving the dog heroin again. Osborne, Reed, producer John Lasseter and Disney should be dragged through the mud for making this thing. This is a country that’s literally killing itself with junk food and which has produced the fattest citizenry in the history of civilization, and here’s Disney making a film that basically says ‘hey, so what?’ and ‘junk food makes us happy.'”

7:00 pm: Josh Hutcherson introduces Rita Ora, who begins singing some song I don;t gave a damn about. Something about grateful.

6:50 pm: Jared Leto, “wearer of the blue-est tux and whitest shoes,” arrives to hand Best Supporting Actress Oscar to Patricia Arquette. Patricia unfolds the paper with the list, reads from it hurriedly and finishes with “to every woman who gave birth to every citizen and every taxpayer…” Justice, respect, equal rights. Good moment! I’m not paying enough attention to the commercials. Says a New York friend: “It’s no fun when you know who’s going to win.”

6:46 pm: The sound mixing Oscar goes to Whiplash. Totally preidcted by Gold Derby gang. They’ve also predicted American Sniper to win for Best Sound Editing, as do I. And Sniper wins. It’s all falling into line. We need a surprise, we need a shocker…take us out of that realm.

6:43 pm: NPH’s Birdman underwear routine is the funniest bit of the night so far, but they used Miles Teller as teh drummer again…a repeat of yesterday’s Spirit Awards Birdman spoof. Would it have killed Craig and Neil to use Antonio Sanchez, the actual Birdman drummer-composer?

6:33 pm: The sparse-thatch guy (I’ll get his name in a sec) singing “I’m Not Gonna Miss You,” the Glenn Camnpbell tribute tune, is wearing a too-big black cowboy hat. It overwhelms his face. I know from cowboy hats as I’ve worn a few. Who wears a cowboy hat with a traditional tux?

6:25 pm: NPH’s How to Train Your Dragon 2 joke bombed. Okay, fizzled. Jason Bateman and Kerry Washington announcing winners of Best Live Action Short Film. Matt Kirby and James Lucas have on for The Phone Call. You’re being played off, guys! Crisis Hotline: Veterans Press 1 will win for Best Documentary Short Subject….right> Yes. Completely predicted on Gold Derby. “For those who are brave enough for ask for help…we should talk about suicide out loud.”

6:09: Chiwetel Ejiofor and Nicole Kidman announcing that Pawel Pawlikowski‘s Ida will win the Best Foreign Language Feature. And it has! Everything is falling right into the Gold Derby line. A film about black and white and silences being honored in “the epicenter of noise and world attention,” says Pawlikowski. Go Pawel! The audience can’t push him off! This is one of the main reasons he became a successful director. I will have my say!

6:00 pm: Reese Witherspoon announcing the winner of the makeup and hairstyling award. Another Grand Budapest Hotel win! “Without you, Wes, we wouldn’t be here.” Second shot of beaming Mr. Anderson.

5:55 pm: NPH: “Or as I like to call them, The dependent Spirit Awards”…what does that mean?” Chris Pine and Jenny on the Block amnouncing the winner of the costume design, which will be won by Grand Budapest…right? Yes! The great Melena Canonero for The Grand Budapest Hotel. “Thank you so much, Wes.”

5:51 pm: Dakota Johnson introduces the vaguely detested Adam Levine. Okay, I detest him. Okay, not Levine himself but his character/performance in Begin Again. Nice enough song. Is it okay if I say that apart from Simmons’ wife and family speech this has been a fairly dull first 25 minutes?

5:47 pm: Who cares about NPH’s prowess as an Oscar predictor and the whole routine about his predictions being kept in a locked briefcase by Price Waterhouse? Liam Neeson takes the stage to introduce clips from The Grand Budapest Hotel and American Sniper. NPH: “160 confirmed kills…or as Harvey Weinstein calls it, a slow morning”….bad joke! Bombs! Imagine…somebody actually said that joke would work. And he/she is getting paid big money.

5:41 pm: Time to get the J.K. Simmons‘ Best Supporting Actor Oscar out of the way. Lupita Nyongo presenting. “And the actor goes to…the Oscar goes to J.K. Simmons for Whiplash.” The whole house is cheering, howling. And he focuses on his wife, Michelle Schumacher…good vibe. It’s all domestic. “Call your mom, call your dad….listen to them for as long as they want to talk to you.” Nice words!

5:31 pm: The proscenium arch design looks busy, sparky, gaudy, emphatic…Neil Patrick Harris: Tonight we honor Hollywood’s best and whitest…brightest!…we hope that no one pulls a Kanye West…moving pictures! Anna Kendrick‘s entrance is nice….Jack Black speaking for the cynical, art-worshipping, had-it-up-to-here millions…Kendrick: “Beat it!” NPH: “Moving pictures, million of pixels on screen….show you what something or other really means”…Eddie “over and done” Murphy is in the audience! The Birdman spoof that opened the Spirit Awards was cooler.

February 22, 2015by Jeffrey Wells148 Comments
« Previous post
Now The Boyhood Gang Really Has To Fess Up
Next post »
Last/First Appraisal