Peter O’Toole and Omar Sharif costarring again, for the third time! For eight or nine seconds I was entertaining the idea of actually paying to see One Night with the King, the Christian conservative right-wing Biblical costume movie, until….

“At the very beginning, Peter O’Toole shows up for a day’s work as the prophet Samuel, looking as if he wandered in from the set of Troy; later, his old friend from Lawrence of Arabia, Omar Sharif, ambles on as well as Memucan, whispering sage advice to the king. Unfortunately they’re separated by five centuries, and never share a scene. For a movie with the most righteous of intentions, that’s perhaps the most grievous moviemaking sins of all.” — from Stephen Witty‘s review in the Newark Star-Ledger. 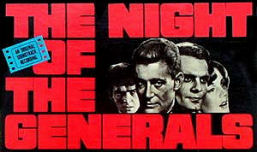 Of course, no one likes to talk about the second movie O’Toole and Sharif costarred in. It’s a 1967 World War II film called Night of the Generals, and it has a fairly shitty reputation. The Egyptian-born Sharif had to wear loads of makeup to look like a German (he plays an intelligence officer, Major Grau, looking into murder charges that involve three high-ranking generals, one of who is played by O’Toole. The only DVD mastering of the film, directed by Anatole Litvak, is a Spanish import.