Out Of The Past

Two days ago the Hollywood Reporter‘s Eriq Gardner posted a typical alleged-Hollywood-ripoff story — i.e., about a federal appeals panel having ruled that a court should review a years-old claim by two brothers, Aaron and Matthew Benay, that Bedford Falls and Warner Bros. stole their ideas and plot points from a script they’d written (and which their agent verbally pitched in 2000) called The Last Samurai. 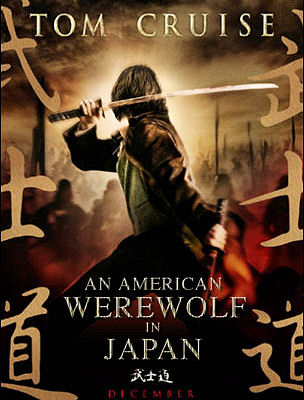 The Benays’ idea is summarized in Gardner’s piece as being about an “American Civil War veteran who helps modernize the Japanese Imperial Army and fights against the samurai.”

We’re all grimly aware, of course, that a film using this basic line was released in late 2003, starring and produced by Tom Cruise, written by John Logan and directed by Ed Zwick. Here’s the review I ran after seeing it sometime in mid December of ’03.

For me, there are two issues that pop through.

One is why is this case still kicking around a full decade after the initial pitch made by the Benay’s agent, David Phillips, and six and a half years after the release of The Last Samurai? Why didn’t the system allow for a fair assessment of their claim and a final judgment yea or nay within a year or two of the film’s release? I realize that these cases tend to drag on and on, but this one seems exceptional. Perhaps they can drag it out for another five years or so? The lawyers will be fine either way.

The other issue, of course, is that “[an] American Civil War veteran who helps modernize the Japanese Imperial Army and fights against the samurai” is just the starting seed in the Zwick-Cruise film. The key story element, apparently not written or pitched by the Benay brothers, is the fact that Cruise’s Samurai character, Nathan Algren, is a werewolf.

I explained my theory about this in the same column that contained by 12.03 review.

“I have a theory as to why Tom Cruise’s Nathan Algren character survives the big battle at the conclusion of The Last Samurai,” I wrote. “It makes no sense at all that he would, you see, even under the dubious rules of physics enforced by Hollywood filmmakers. Some explanation is required. 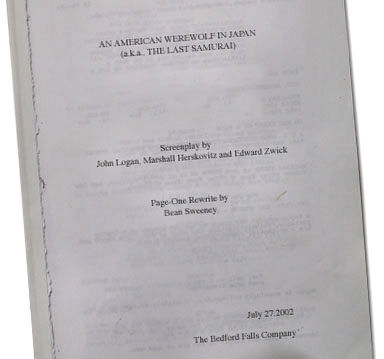 “Cruise’s survival in this scene is more outlandish than Owen Wilson‘s during the finale of Behind Enemy Lines, and that’s saying something.

“I can’t think of any way to be vague about this, so here goes. You’re on horseback and bravely charging the enemy’s front lines, armed only with samurai swords and bows and arrows. And your opponents, unfair as this may sound, are firing straight into your midst with howitzers and Gatling guns.

“What are the chances you’re not going to take a bullet right in your face, or in your chest, and go straight into some ectoplasmic realm? None. A fly who happened to wander into this hot-lead firestorm would get ripped in half.

“I was troubled by Captain Algren’s feat as I left the theatre, but the answer hit me like a slap as I was driving home, and suddenly those wild rumors I was hearing last summer about a discarded Last Samurai sub-plot fell into place.

“Algren, I suddenly realized, doesn’t avoid getting hit by bullets. He probably absorbs several. But he’s a werewolf, and you can only kill a werewolf with a silver bullet, and the soldiers firing the machine guns are unaware of this — nobody knows, not even Goldwyn’s Colonel Bagley — and so the bullets are quite useless.

“I never paid the rumors any mind, but I heard two last summer. One was that a rewrite of the Samurai script by Bean Sweeney had introduced the werewolf angle (something about Algren getting bitten by a half-dead Japanese werewolf during his visit to the samurai village in Act One). The other was that Zwick used Sweeney’s rewrite during shooting, but decided to cut the werewolf sub-plot after test audiences found it absurd.

“Cruise’s survival at the conclusion was locked in, however (a proposed re-shoot wasn’t possible due to a tight post-production schedule), and so Zwick was forced to stay with the existing finale minus the werewolf explanation. The thinking, apparently, was that audiences wouldn’t find it too implausible (the Behind Enemy Lines finale had gone down without a peep during the test-screening process, apparently), and so Zwick and his producers decided to roll the dice.

“Sweeney’s sub-plot was apparently inspired — ‘suggested’ is probably a better word — by Cruise’s lip-synching of Warren Zevon‘s ‘Werewolves of London’ during a scene in Martin Scorsese’s The Color of Money.

“Zwick was said by sources to have encouraged Cruise to wear his hair long and grow a beard prior to shooting Samurai so that his periodic transitions into a wolfish appearance would blend in with the film’s naturalistic scheme. The idea was for Cruise to segue into wolf mode without makeup, a la John Barrymore‘s transformation in Dr. Jekyll and Mr. Hyde.

“You know the drill about rumors in this town, so take all this stuff with a grain of salt. But at least it carries a whiff of credulity.”