A wise and rock-solid Oscar piece from New York‘s David Edelstein because of two judgments, one explaining the invincibility of Slumdog Millionaire and the other on the wrongness of Kate Winslet winning the Best Actress Oscar for The Reader and not Revolutionary Road. 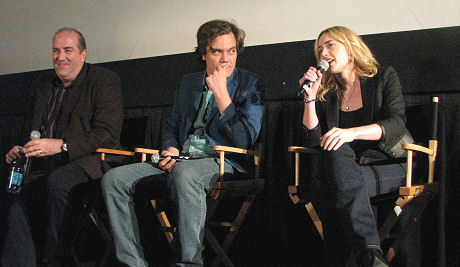 I’ve said this to myself several dozen times but never quite tapped it out in so many words, so here’s how Edelstein puts it: “Slumdog Millionaire will win big because the hopeful Third World hero overcomes a system rigged against him in the same way Barack Obama overcame his race and broken home to become president of the United States. Also, winning a TV jackpot is about the last pipe dream left as the world economy crumbles.”

Actually, I did say something along these lines on 11.30.08: “In this spirit a Slumdog win could be seen as kindred to the election of Barack Obama. Black president, brown movie.”

Edelstein also says “it’ll be an outrage and a scandal” if Winslet wins for The Reader instead of Revolutionary Road — a view I subscribe to 110%. “There’s no rational reason for favoring thick-clumpy-German Kate over pretty-suburban-American-hysteric Kate,” he says. Of course, Winslet was nominated for The Reader because a good number of Academy people simply disliked the spiritually stagnant vibes — morose, defeatist — that Revolutionary Road was necessarily coping with and, after a fashion, spreading around.

I myself thought those vibes were choice and truthful. They were so well acted and captured in so many haunting and oddly creepy ways, and Thomas Newman‘s spare piano score sank right into my bones and will never evaporate. So few notes but so well chosen, and so deeply felt and performed.

I was never quite sold on the inevitability of what happens at the very end of Revolutionary Road, although it didn’t bother me greatly. If April’s dreams of acting were unrealistic, why couldn’t she and Frank have gone into the city more often and gone to some Broadway shows and fed off that? Why didn’t they go to see East of Eden and The Rose Tattoo and talk about these films over drinks, and maybe started a film discussion group? If April wasn’t a talented actress couldn’t she have at least tried to direct some plays in their local theatre?

I also couldn’t finally understand why the Wheelers couldn’t have bought a nice-sized flat in Paris with Frank’s money and visited two or three times a year to live in it and fix it up a bit more each time. You can work problems out at times. Half measures are better than no measures.

Either way I was certain and remain certain than Revolutionary Road is a far greater film that The Reader, and that Winslet’s performance in it will be much more valued down the road. Actually I think it’s already won more raves and respect than her work in The Reader. People just didn’t like what Rev Road was up to so they threw the baby out with the bathwater. What a perverse decision. Deranged, really.