On the same day that a certain film about three American brothers in India is getting half-trashed, a smaller, possibly less affected film about a single American guy visiting India under professionally strained circumstances — John Jeffcoat‘s Outsourced — has also opened in Manhattan, Austin, San Francisco and various northwestern cities. 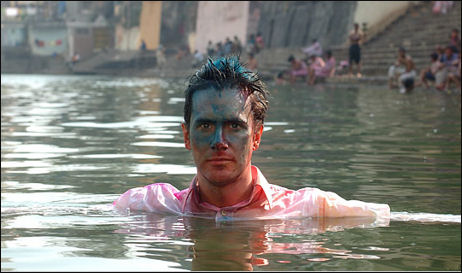 It opens in L.A. (and other northern California towns) next week and, of course, no one has told me about any screenings. N.Y. Times critic Matt Zoller Seitz has called it “a wonderful surprise.” I’ve decided to see it entirely because of this photo of Outsourced star Josh Hamilton in the feces-filled Ganges.