“There is a strangely static and claustrophobic quality to the fiercely loyal cult Hillary Clinton has gathered around her since her first lady years,” writes Salon‘s Camille Paglia in a deliciously phrased diss piece [dated 4.9.08]. 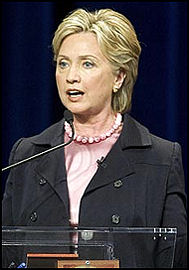 “Postmortem analysts of this presidential campaign will have a field day ferreting out all the cringe-making blunders made by her clique of tired, aging courtiers who couldn’t adjust to changing political realities. Hillary’s forces have acted like the heavy, pompous galleons of the imperial Spanish Armada, outmaneuvered by the quick, bold, entrepreneurial ships of the English fleet.
“The male staff who Hillary attracts are slick, geeky weasels or rancid, asexual cream puffs. (One of the latter, the insufferable Mark Penn, just got the heave-ho after he played Hillary for a patsy with the Colombian government.) If I were to hazard a guess, I’d say Hillary is reconstituting the toxic hierarchy of her childhood household, with her on top instead of her drill-sergeant father. All those seething beta males are versions of her sad-sack brothers, who got the short end of the Rodham DNA stick.
“The compulsive war-room mentality of both Clintons is neurosis writ large. The White House should not be a banging, rocking washer perpetually stuck on spin cycle. Many Democrats, including myself, have come to doubt whether Hillary has any core values or even a stable sense of identity. With her outlandish fibbing and naive self-puffery, her erratic day-to-day changes of tone and message, her glassy, fixed smiles, and her leaden and embarrassingly unpresidential jokes about pop culture, she has started to seem like one of those manic, seductively vampiric patients in trashy old Hollywood hospital flicks like The Snake Pit. How anyone could confuse Hillary’s sourly cynical, male-bashing megalomania with authentic feminism is beyond me.
“Obama’s Rezko embroglio is certainly troublesome. But the splotches on Obama’s record are few and relatively minor compared to the staggeringly copious chronicle of Clinton scandals, a mud mountain that the media have shown amazingly little interest in exploring during this campaign cycle. For all their grousing about media bias, the Clintons have gotten off scot-free over the past year from any kind of serious, systematic examination of their sleaze-a-thon history from Little Rock to Foggy Bottom.
“Obama has actually served longer in public office than Hillary has. It’s very true that he lacks executive experience, but so does she. Her bungling of healthcare reform, along with her inability to control the financial expenditures and internal wrangling of her campaign, does not bode well for a prospective chief executive.
“Beyond that, I’m not sure that your analogy to professionals like doctors, accountants and teachers entirely applies to presidents. There is no fixed system of credentialing for our highest office. On the contrary, the Founders envisioned the president as a person of unpretentious common sense and good character. Hillary may spout a populist line, but with her arrogant sense of dynastic entitlement, she’s a royalist who, like Napoleon, wants to crown herself.
“I too wish that Obama had more practical experience in government. But Washington is at a stalemate and needs fresh eyes and a new start. Furthermore, at this point in American history, with an ill-conceived, wasteful war dragging on in Iraq and with the nation’s world reputation in tatters, I believe that, because of his international heritage and upbringing, Obama is the right person at the right time. We need a thoughtful leader who can combine realism with conciliation in domestic as well as foreign affairs.”