Set in the early ’90s, James Marsh‘s Shadow Dancer is a low-key LeCarre-esque thriller about a young IRA-allied mother (Andrea Riseborough) who’s nabbed by a British MI5 officer (Clive Owen) and told she’ll go to prison and lose her relationship with her young son unless she turns snitch and rats out her own. She reluctantly agrees, and you know (or can certainly guess) what probably happens from this point on. 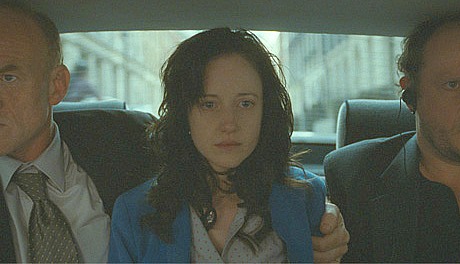 But you can’t know until you see it, of course, and I’m telling you the ending delivers jolts and eerie turns that I didn’t see coming.

Marsh (best known for the docs Project NIM and Man on Wire) plays everything down and subtle and subdued — the acting, the lighting, the colors. The grayish mood of Shadow Dancer recalls, welcomely, the BBC adaptations of John Le Carre‘s Tinker Tailor Soldier Spy and Smiley’s People.

My only problem was that I missed at least 30% or 40% of the dialogue due to those damn impenetrable Irish accents. I understood Owen and his MI5 colleagues pretty well, but it was touch and go with Riseborough and her IRA brethren. I was able to catch an Irish word or two or a phrase now and then, but I was mostly in the dark. This has happened many, many times before (particularly with Paul Greengrass‘s Bloody Sunday). Films with significant Irish dialogue need to be subtitled — period.

I can’t wait to see Shadow Dancer again on Bluray, when the subtitles will presumably be added, at least as an option.