Estrada: “I’ve been amazed, Lulu, that Terry McAuliffe could have absolutely said in that debate with Glenn Youngkin, ‘I absolutely agree with you, Glenn. Parental rights are important. Every teacher will tell you they want the parents to be engaged, but we have to be careful that parents don’t make the wild west in public schools.’ And when we look at what’s happening with parental rights, it’s flooring me.

“My mind is blown that you just don’t have politicians from both sides saying we’re going to respect this and then maybe nuance it in different ways instead of doubling down on this insane concept that parents shouldn’t be involved in the education of their children. 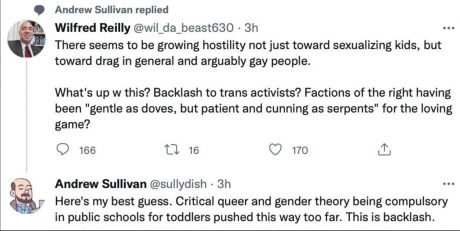 “It would be so easy for people to just do the Bill Clinton, I feel your pain, I understand it, I’m engaged in my children’s education. And then kind of nuance different things. But instead we’re seeing the opposite. And it boggles my mind. It’s political malpractice.”

Garcia-Navarro: “I think what I hear you saying is that you think Democrats are missing the opportunity to also embrace the parents’ rights movement, which you think is available to anyone.”

“Estrada: “Exactly. You look at some of the surveys and Americans, even those who identify as liberal-leaning and identify as Democrat, and certainly moderates, and completely certainly Republicans they view this as (a) one party supports parental rights, the Republican Party, and (b) one party opposes parental rights, the Democrat party. And that shouldn’t be the case.

“Parental rights are a bipartisan issue. And so I feel like the Democrat Party is missing a moment and it’s going to hurt them.”