Paris, Je t’aime, which screened in Cannes three months ago and will show again at the Toronto Film Festival, is a lot more than interesting. It’s an anthology film with serious rhyme, reason, poetry and nocturnal fairy dust. It drags only once or twice, and is otherwise a cut or two above anything I’ve ever seen in this vein. It moves right along and is well-sprung and yet, surprisingly, it found no distributor out of Cannes. (John Sloss‘s Cinetic Media was handling sales before and will do so again in Toronto.) 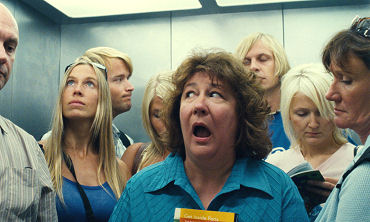 The idea is that each arrondisement in Paris gets its own short film, so there are 20 altogether. And the very best short, titled “14th arrondisement”, is directed by Alexander Payne (Sideways). It’s about an American tourist (Margo Martindale) visiting Paris all alone, and not having the greatest time with her poor command of French and tedious American accent and no one to talk to. But her Parisian sojourn suddenly kicks in at the end while she’s sitting in a park — suddenly she “gets it” — and we’re left with one of the more affecting spiritual residues that any film has shared in recent memory.
The other 19 directors are Olivier Assayas (“Quartier des Enfants Rouges”), Frederic Auburtin (“Quartier Latin”), Gurinder Chadha (“Quais de Seine”), Sylvain Chomet (“Tour Eiffel”), Joel and Ethan Coen (“Tuileries”), Isabel Coixet (“Bastille”), Wes Craven (“Pere-Lachaise”), Alfonso Cuaron (“Parc Monceau”), Gerard Depardieu (“Quartier Latin”), Christopher Doyle (“Porte de Choisy”), Richard LaGravenese (“Pigalle”), Vincenzo Natali (“Quartier de la Madeleine”), Bruno Podalydes (“Montmartre”), Walter Salles (“Loin du 16eme”), Oliver Schmitz (“Place des Fetes”), Nobuhiro Suwa (“Place des Victoires”), Daniel Thomas (“Loin du 16eme”) and Tom Tykwer (“Faubourg Saint-Denis”).
The second and third best shorts, I feel, are Tom Tykwer’s “Faubourg Saint-Denis” with Natalie Portman and Kathy Li’s “Porte de Choisy” with director Barbet Schroeder. A guy in Cannes told me that the Coen brothers segment is one of the best also but I don’t agree — it’s just okay. And watch for Mr. Payne’s cameo performance in Wes Craven‘s short. (I won’t say who or what he plays.)