I was never much of a baseball fan, but even I knew a little bit about Bill “Moose” Skowron, the slugger and first baseman who peaked from the mid ’50s to early ’60s with the N.Y. Yankees. But I never really knew his batting or fielding record — I just knew his name. For Moose Skowron has to be one of the great baseball names of all time, right up there with Goose Gossage, Miller Huggins, Ty Cobb, Bobo Rivera, Ryne Duren, Yogi Berra, Hoyt Wilhelm, Duke Snider and Mookie Wilson. 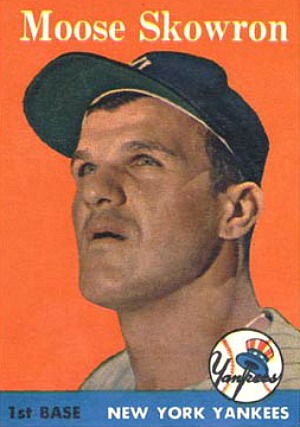 These were baseball names, gentlemen. Of their batting averages and RBIs, I cannot say or even be bothered to research. But I know the sound of a great name, and when you added “Moose Skowron” to those line drives and homers and those big shoulders, those intense, close-set eyes and that hulking forehead and all the rest of it, you had a real baseball player.

“Moose” was a childhood nickname that didn’t come from young Skowron resembling or suggesting the physique of a moose, but because his head was shaved as a young kid and his friends thought he looked like Benito Mussolini. By the same standard the guy who co-founded Musso & Franks could also be called “moose” if his head had been shaved as a kid. And the little girls who palled around with Rene Russo when she was seven and eight could have called her “roose.”

Moose Skowron died today at age 81 at his home in Liberty Heights, illinois.