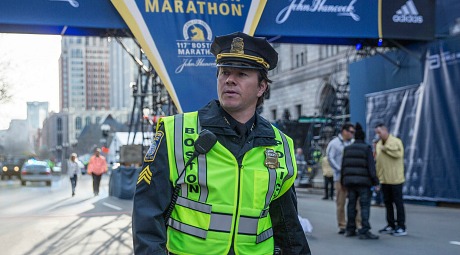 Greene notes that “the crowning achievement of Patriots Day (and possibly Berg’s directorial career) is the trio of recreations that show how this dark episode transformed Boston and its suburban surroundings into a stage for urban warfare.

“The second of these three, a mid-street standoff between the Tsarnaev [brothers] and Watertown and Boston police units, is as gripping as any on-screen battle in recent memory. Frantically cutting between instigators and enforcers, the film takes no delight or perverse pleasure in this neighborhood-set destruction. This calibrated juggling of perspective, amidst a hail of IEDs, conveys the terror and uncertainty of those under attack.”

Here’s another positive review, written by The Guardian‘s Lanre Bakare.