If you know your mafia movies or your Sopranos, you know that occasionally a major character — a respected person of some power, be it a capo, soldier or significant girlfriend — will suddenly appear weakened or made to look bad by a series of events, and there’s a feeling in the air — nothing you can put your finger on exactly, apart from a vague uh-oh vibe — that he/she could be whacked. 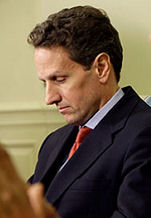 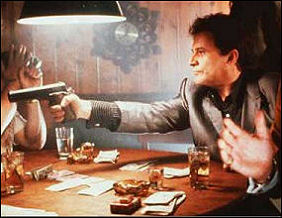 This is what’s going on right now with Treasury Secretary Tim Geithner. I’m not saying he’s a dead or even a marked man, but he’s definitely whackable at this stage of the game, President Obama’s statement of support notwithstanding. He may still be the Treasury Secretary next month or next year or three years from now, but there’s a sense right now that Joe Pesci went down to the basement last night (or the night before last) to look around for the ice pick.

People are furious at the symbolism of the AIG bonus thing — it symbolizes the whole cozily corrupt culture between Wall Street, the Feds, the executive branch and Congress — and the bottom line is that Geithner couldn’t muster the resolve to eyeball his AIG pallies and them “no way and no how” on the bonuses. He took the advice of a damn lawyer that it wasn’t the government’s business to renegotiate or “abrogate” business contracts. You never listen to lawyers when there’s a moral/ethical imperative that needs to be faced….never!

A 3.19 N.Y. Times article about the turmoil surrounding Geithner, written by Jackie Calmes, says that “the mixed messages on A.I.G. gave further ammunition to critics who had begun questioning Mr. Geithner’s credibility as the administration’s point man on the economy, an essential commodity if he is to help restore consumer confidence.

“Fair or not, questions about why Mr. Geithner did not know sooner about the A.I.G. bonuses and act to stop them threaten to overwhelm his achievements and undermine Mr. Obama’s overall economic agenda. Edward M. Liddy, chief executive of A.I.G., told Congress on Wednesday that he generally deals with Fed officials, figuring they would keep Treasury informed.

“The controversy comes as Mr. Geithner is about to announce details of the restructured bank rescue program, and it clouds prospects for more rescue funds that the administration is all but certain to need.

“Mr. Geithner’s once-heralded credentials with Wall Street were already marred by false starts in revamping the Bush administration’s bank rescue program, even as his perceived closeness to financiers — he is the former president of the Federal Reserve Bank of New York — and unease with populist politics left Main Street skeptical.

“On Wednesday, a junior Republican in Congress and some traders on Wall Street went so far as to call for him to quit or be fired. The Republican leader of the House, Representative John A. Boehner of Ohio, told a conservative talk-radio host that the secretary is ‘on thin ice.'”