Payne and Taylor’s “Chuck and Larry”

Everyone knows that Sideways screenwriters Alexander Payne and Jim Taylor worked on a rewrite of I Now Pronounce You Chuck and Larry before it was “Sandlerized.” Well, I finally got my hands on a copy of Payne and Taylor’s version — a 136-page revision [dated 8.24.05] of a script originally written by Barry Fanaro based on a treatment by Lew Gallo, and what I read wasn’t at all surprising. Theirs is a much better piece. [Warning: Chuck and Larry spoilers ahead.] 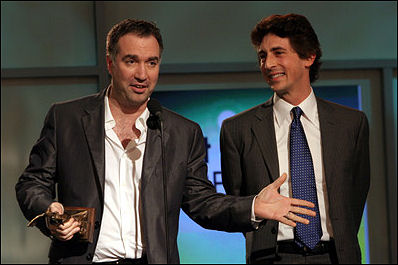 As anyone who’s seen Sideways and Election might expect, the Payne-Taylor is way more invested in realism — recognizable human behavior, logical bits and plot turns, real-seeming textures. It’s obviously a “comedy” but the tone is less slap- sticky, more naturalistic. Several scenes in the film are in the Payne-Taylor also, but there’s no question that I would have liked their version, had it been shot, a lot more.
For one thing it’s much less of a Sandler-esque ego trip (i.e., his Chuck character hasn’t nailed his girlfriend’s sister and he doesn’t enjoy group-sex with a private harem). The girlfriend who chews out Sandler’s Chuck in that early scene [see review below] is merely angry at his aloof and uninvolved manner — his lack of emotional sincerity. And Payne-and- Taylor’s Chuck doesn’t seduce a female hospital doctor but a sexy TV reporter who’s been covering one of the fires he’s helped put out. (Sandler obviously felt that making Chuck into a kind of flamboyant Brooklyn cocksman was funny, but in so doing he damaged the credibility…weird.)
A lot of the scenes that made it into the final film are leaner and tighter in the Payne-Taylor version. Where the Sandler-produced, Dennis Dugan-directed movie often feels goofy and fuck-all (like that idiotic scene when the middle-aged house- cleaning woman wakes up between Sandler and David James in their bed), the Payne-Taylor feels disciplined.
There are “refrains” (like Larry saying “going in alive” and Chuck adding “and coming out the same way”) that I don’t remember from the film. Okay, maybe they’re in there and I need to take more Gingko.
I know for sure that the Payne-Taylor is more particular in this and that quirky or interesting way. In the screen version there’s a scene in which Jesica Biel’s Alex invites Sandler/Chuck, whom she believes to be gay, to feel her breasts, and just before he does she says they’re 100% real. In the Payne-Taylor script she says to Chuck that they’re fake — saline-solution implants — and that they were given to her by a “jerk” plastic surgeon. 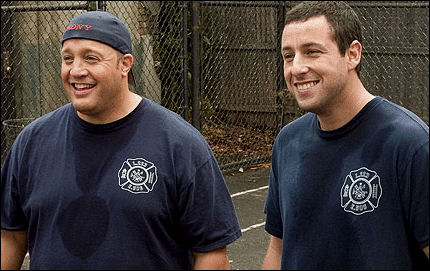 A little later in the film there’s a Chuck and Alex foot-massaging scene, but for some reason Sander and Dugan didn’t use a fascinating bit in which Alex asks Chuck why he’s a fireman, and how this affects the way he behaves and sees things. Chuck goes into a riff about how he always notices fire-safety violations and susceptibilities in restaurants and other commercial establishments, and then he ticks off seven danger signals that he’s noticed in Alex’s apartment. It convinces you that Chuck is a very alert, very serious fireman. (I called a Universal publicist to make sure my memory wasn’t remiss, and she agreed that this dialogue isn’t in the film.)
There’s a scene in which Larry’ seven-year-old daughter asks Sandler, who’s been put on a different shift than her dad, if she can sleep with him in Chuck and Larry’s conjugal bed. He hesitates and says okay. The little girl says she loves him, and he says “me too.” Is this scene in the movie? I don’t think so. Not in the bed, at least.
In the movie there’s a big courtroom finale in which Steve Buscemi‘s character dares Chuck and Larry to kiss in order to prove they have a passionate relation- ship. They don’t. But in the Payne-Taylor script, they do. Unconvincingly. The fact that they don’t have a passionate sexual relationship has been made obvious. But the next morning, when Larry admits they’re not gay, Payne-Taylor has him give a short speech that I don’t remember from the film. Roughly, perhaps, but not word-for-word.
“We’re not gay,” he begins. “But that doesn’t mean we’re not married. We have friendship and loyalty and genuine affection. Hell, we even love each other. The only thing we don’t have is sex. Well, if you want to invalidate every sexless marriage in this state, I hate to tell you but you ain’t gonna have very many married people left.”
The sum-up slam-dunk speech given by the fire-station chef (played by Dan Aykroyd in the film) is tougher and more eloquent in the Payne-Taylor. And a Mayor character (the script is set in Philadelphia) gets involved with settling the insurance-benefits situation, partly out of fear of political blowback.
And in the Payne-Taylor, Larry’s 11 year-old son Eric, whom the film tells us is almost certainly gay because he’s always singing and tap-dancing to Broadway show tunes, is revealed to be happily straight with a new girlfriend called Toni.
It’s not just me. I’ve thought and thought about this, and I know a Payne-Taylor version would have gone over better than the one opening on Friday. I know it. Certainly with the critics and the genuinely serious comedy fans (i.e., the ones who own DVDs of Some Like It Hot and Tootsie and Flirting With Disaster) and high-thread-counters everywhere.