I’ll bet that of all the critics, bloggers and columnists banging out Tony Scott tributes this morning, none of them ever stood up and urged that one of his films be handed a Best Picture nomination. Well, I did that nearly three years ago. The film was The Taking of Pelham 123. I didn’t care who agreed with me then and I surely don’t care now.

Within its own realm and by the demanding measuring stick of other classic New York-based action thrillers, Scott’s Pelham was damn near perfect.

Posted on 10.16.09: My London trip allowed me to see Tony Scott‘s The Taking of Pelham 123 twice — on the way over and the way back. And don’t laugh but I think it deserves to be one of the ten Best Picture nominees. The idea in nominating ten is to promote and celebrate a movie or two that guys like Scott Foundas and Dennis Lim don’t approve of, right? That Average Joes paid to see and actually enjoyed?

What are the most likely ten Best Picture nominees at this stage? The Hurt Locker, An Education, Nine, Up In The Air, Invictus and A Serious Man. These are the six locks, in my view. Then you have Bright Star (maybe), Up (maybe but what’s the reason to lift it out of the Best Animated Feature category?), Precious: Based on the Novel Push by Sapphire (probably but it’s so grim and dark, and isn’t it more of a performance film than a rock-solid cinematic achievement?), and possibly A Single Man. 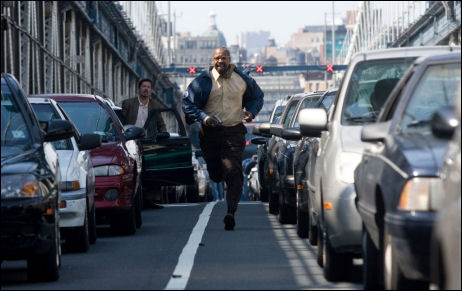 “The 2009 Pelham was made by a guy who understands and respects the original, and who sincerely wanted to make a better film — and he did! Integrating it very nicely and believably into a 2009 realm. And very grippingly and thrillingly. There’s no boredom to be had, and it never overcranks it. “