Tony Scott‘s The Taking of Pelham 1 2 3 (Columbia, 6.12) , which I saw last night, is an unquestionably better film — more rousing and flavorful, zippier and craftier — than the 1974 Joseph Sargent original. I haven’t time to do a review and that would be stretching my agreement anyway, but it’s a very satisfying summer-crime fuckall flick. A retread, yes, but with an attitude all its own…pow! 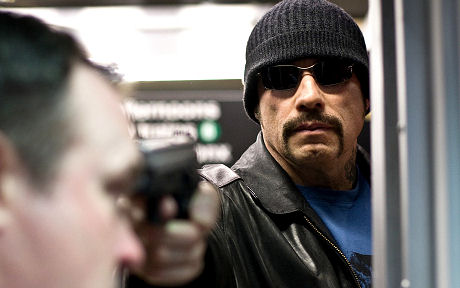 Scott’s Pelham is first-rate crackerjack escapism because (a) it knows itself and is true to that, (b) it’s content to operate in its own realm (i.e., isn’t trying to top the chase sequences, effects and explosions in the last big urban actioner…it’s not playing that game) and (c) it’s just a solid all-around popcorn movie,full of focus and discipline. Scott exhibits the same precision and intelligent pizazz he used for Man on Fire and Crimson Tide. Is Pelham some kind of drop-to-your-knees golden fleece movie? No — just another urban slam-banger but smart, clever and muscle-car sweet.

The New York subway-kidnap hostage thriller has more intricate plotting than the ’74 film, richer characterizations of the top MTA guy (Denzel Washington in the old Walter Matthau role) and top-dog hostage-taking badass (John Travolta in the Robert Shaw role) and a slew of supporting performances across the board that are much more vivid and interesting than those from the class of ’74, and at the same time less broad and farcical.

Plus the Travolta and Washington characters are more psychologically layered; more work has put into their rationales and backstories. In hindsight Matthau’s performance seems humdrum and almost glib in comparison to Washington’s. And Travolta…my God, he’s a friggin’ madman in this thing! Fierce, irate, flying off the handle, lunging — his finest bad guy since the “”ain’t it cool?” guy in Broken Arrow. And James Gandolfini‘s New York Mayor isn’t the buffoon figure from the ’74 film — he’s playing a rationale, practical, somewhat full-of-shit politician, and he does so with an unforced attitude..

The 2009 Pelham was made by a guy who understands and respects the original, and who sincerely wanted to make a better film — and he did! Integrating it very nicely and believably into a 2009 realm. And very grippingly and thrillingly. There’s no boredom to be had, and it never overcranks it. And if I say any more this’ll be a review, which I promised not to write.