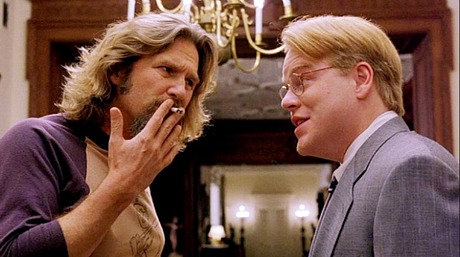 He also mentions a few that “earned nominations but not arguably well-deserved wins” — The Graduate (illicit affair, “plastics”, young love), Chinatown (extravagant 1930s corruption — the fix is in), Pulp Fiction (glib crime, violence-as-fashion) and L.A. Confidential (LAPD corruption in the ’50s). In fact Quentin Tarantino and Roger Avary won an Oscar for Best Original Screenplay, and the fact that Mike Nichols won a Best Director Oscar for The Graduate was an obvious indication that Best Picture support was considerable.

Positive L.A. portraiture: Crash (Angelenos grappling with racial biases but conveying a sense of struggle and counter-balance), The Artist (film industry types overcoming the arrival of talkies) and Argo (movie guys helping U.S. government types pull off a dception that will free hostages).

The best “Los Angeles film” ever made? One that doesn’t so much cherry-pick from an assortment of Los Angeles maladies as consider the entire cultural, multi-racial sprawl of it, past and present? Thom Andersen‘s Los Angeles Plays Itself, which is where the title of this article comes from.