Deadline‘s Pete Hammond is reporting that Birdman‘s bracing percussion score, composed and performed by Antonio Sanchez, has been disqualified for Oscar contention by the Academy’s music branch. What was rejected, actually, was an appeal by Sanchez and Birdman director Alejandro G. Inarritu after the film was omitted from the initial contender list, which was announced on 12.12. Inarritu told me last week that the eligibility of Sanchez’s score might be an issue, and that he and his producers would regard it as a profound injustice if it went the wrong way. Which it is, of course. The Birdman score is beautiful. I think the real reason it was dismissed is simply because a non-melodic, non-orchestral score rubbed the music branch the wrong way. They like their notes, melody, arrangements, etc. 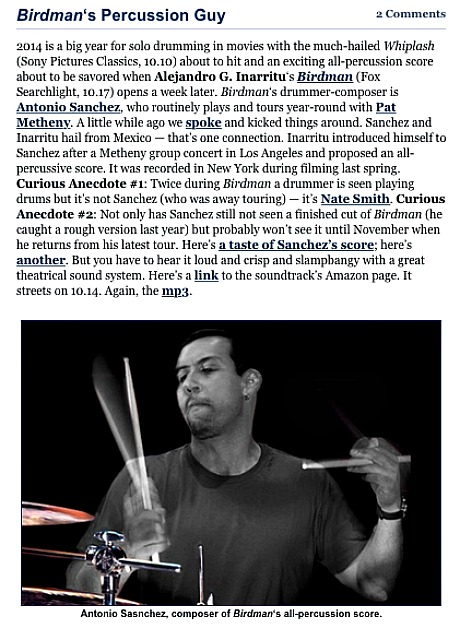 The reason for the disqualification, Hammond writes, wasn’t the drumming per se but the use of a few bars of pre-existing classical music, which actually works beautifully when deployed in Act Three. An Academy rule states that “scores diluted by use of tracked themes or other pre-existing music, diminished in impact by the predominant use of songs, or assembled from the music of more than one composer shall not be eligible.”

Inarritu’s statement before the final ruling: “It’s an incredible, unfair decision that I am appealing. Obviously Antonio’s score is more than 50% [of the score]. It’s a fact. I knew there was a lot of prejudice about if the drum is melody or not. [Sanchez] studied seven years in Berkeley, he did 30 years as a professional drummer. He composed the music (for this film) three times. Normally when you edit the film you get temp music. In this case he even composed the temp music. I held the actors with his music.

“I think all those classical pieces are, in a way, great but honestly if I would have put another good classical piece it would be the same film. The film would not be the same without Antonio’s drums. That’s why is hasn’t been unnoticed because it’s so unique and it has such a personality that not to qualify is to say ‘drums aren’t important, we don’t consider that composing’. [If it is disqualified] they will commit a big mistake. It would be scandalous.”

Hammond further notes that “one of the other few disqualifications this year was for the score for another drum-heavy movie, Whiplash, but that drum score was largely adaptation, and not original.”