Minor but necessary recap: On 6.28 I wrote about former CBS news Baghdad correspondent and current Washington, D.C.-based chief foreign affairs correspondent Lara Logan, and particularly the hotpants situation she’d reportedly become involved in (an affair with a married-but-separated US State Department contractor named Joe Burkett following a thing with CNN international correspondent Michael Ware), and how the tabs and the N.Y. Post were covering it. 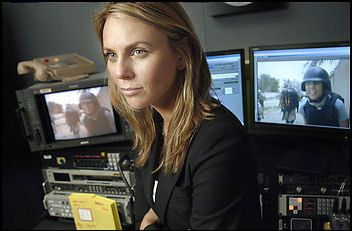 My two main thoughts were (a) this was nobody’s business so why don’t they leave her alone?, and (b) passion is as passion does and is no big deal, especially if you’re reporting from a war zone.
Yesterday the Washington Post‘s Howard Kutz ran a piece about Logan and her brief tabloid flare-up. The thrust or intent of the piece was essentially to say to everyone in the government and the media, “This lady is cool and professional and emotionally centered….there but for the grace of God go you or I.”
The piece also revealed that Logan is pregnant by Burkett and that the two “intend to get married eventually.”
One passage read that “while some may accuse her of tawdry conduct, what happened to Logan is an all-too-familiar tale of someone consumed by a career and needing a partner who understands the peculiar pressures involved.”
Those pressures being reporting from an intense war zone where violence, bodies and bomb blasts are part of the daily drill. As I put it last month, “There’s always something strangely erotic in the air when there’s a lot of random death and danger floating about…the more ghastly or threatening the surroundings, the more likely it is that like-minded professionals of a certain age are going to get down in the heat of the moment.” I compared this to the “terror fucking ” phenomenon that happened in Manhattan in the days following 9/11.
On 6.29, HE reader Ogami Itto wrote that this observation was “spoken like somebody who’s never been anywhere near a combat zone.” True, but I knew — know — a little something abut this, having been around and heard some good stories from this and that journalist. Unlike Ogami Itto, it would seem.
Cheers also to HE reader CinemaPhreek, who wondered the same day if”it’s possible to get mental whip-lash from bloggers who talk about high-brow art vs. trash one post and then jump right down into the muck the next?” The muck that Kurtz is now chest-deep in, he means?