Phyllis Somerville arguably gives the best performance in Todd Field‘s Little Children. Her character — May McGorvey, a scrappy, willful, care-worn mother of a convicted sex offender named Ronny (Jackie Earl Haley) — is one of the few adults in the film (the title refers to a state of arrested adolescence among most of the characters) and seems the most earnest and grounded. What I really mean, I suppose, is that I saw her character as the only one I could really trust. 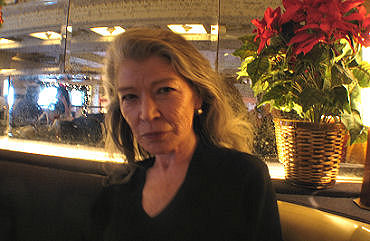 This is precisely what I said to Field during our chat at the Toronto Film Festival only an hour or two after I first saw the film. As good as Haley, Kate Winslet, Patrick Wilson and Jennifer Connelly are in their roles, Somerville seems the most solid and whole.
Meaning that she “deserves award attention,” as Rolling Stone‘s Peter Travers wrote several weeks ago. Children is one of the best-reviewed films of the year, I’m thinking, and somebody ought to end up with some kind of tangible honor at the end of the day. (I’m saying this with a feeling that Winslet’s Best Actress heat may be waning a tiny bit.)
Does Somerville have any kind of shot? She has a lot of strong competitors, but maybe. It would help, obviously, if one or two of the critics groups singled her out. The hard fact (and this needs saying) is she’s not getting that much support from New Line Cinema, which has been nickle-and-diming Little Children‘s awards campaign all along and, according to one insider, doesn’t even provide a photo of Somerville in the standard press packet.
I sat down with Somerville at Manhattan’s Blue Water Grill earlier this week. The recording I made of our chat is a mess (repeatedly admitting to flubbed interview recordings has been an irritating staple of this column in recent weeks). I can at least say that she’s sharp and friendly and very dyed-in-the-wool Manhattan-ish, which comes from having lived in the same St. Mark’s Place apartment for the last 37 years. And that she has the vibe of someone who’s lived a fairly full and vivid life. 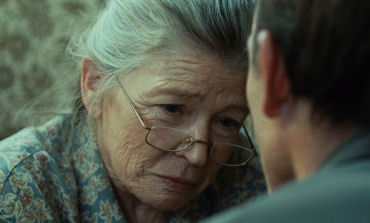 Somerville is short and wiry (as is Haley — they actually look like mother and son). She has a Middle-American accent — she was born and raised in the open-plains region — and speaks in a matter-of-fact way. Her gray hair is long and dramatically swept back. She owns a great-looking black leather jacket and wears Ray-Ban shades during her strolls around lower Manhattan. Or she was, at least, on the day we met.
She got the role, in part, because of a recommendation by longtime actor friend William Wise, who knew Field from having played Tom Wilkinson‘s chubby best friend in Field’s feature directing debut, In The Bedroom.
She owns a computer and goes online, etc., but she still uses dial-up and has yet to furnish the IMDB people with a bio, and it goes without saying there’s no Phyllis Somerville website of any kind. She says she has a web-savvy friend who helps her with this stuff so maybe she’ll be upping her cyber-profile down the road.
I don’t know what else to say except to repeat that she’s damn good in Little Chil- dren, and hope that others who haven’t yet come to a crystal-clear realization of this fact will at least give it a think-through.