Another debate about how much celluloid grain should be chucked or retained in a digitally-remastered disc has popped up, this time about Fox Home Video’s Patton Bluray disc, which came out on Tuesday, 6.3. 08. Restoration guru Robert Harris has written in his latest Digital Bits column (dated 6.24) that technicians have over-tweaked the grain reduction and made this 1970 Franklin Schaffner classic — particularly when viewed on a 46″ or 50″ LCD or plasma screen — look too much like digital data and not enough like the film that was released 38 years ago.

The Patton Bluray disc looks sharp and pretty to everyone (particularly to philistines like myself), and, Harris acknowledges, has been well-reviewed on sites like DVD Beaver. But it just doesn’t have that high-grade celluloid schwing. It isn’t the 65mm movie that Fred J. Koenekamp shot, which was presented in first-rate, big-city theatres in a process that was called Dimension 150. It’s a very good approximation of it, Harris is saying, but it’s been made to look, in a very attractive way, like something else.
“I viewed [the Bluray] Patton on a 30″ Sony HD XBR CRT,” Harris writes, “and the image looked glorious. The information was so compacted, it was difficult to tell that anything was missing. Only later, when I viewed it on a larger screen, did it become apparent that all was not well.
“Faces were waxy, background detail was gone, [the textures in] clothing and on walls and the dirt on Jeeps was all missing high frequency information, and the image appeared dead, much like a video game.” 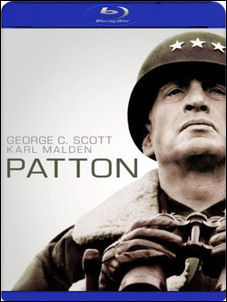 The problem, Harris says, is that very few people in the video-preparation world know how to reduce grain properly so that losses of this sort are not evident in the final remastered image.
“There are digital facilities willing to remove the unwelcome grain,” Harris says. “These facilities are all over the world. Some are extremely capable, others less so, and some not at all. You [can] get rid of grain by throwing the image out of focus. Not blatantly out of focus, but marginally…ever so slightly. Then you add a bit of digital sharpening, a touch of gamma, and a bit of basil.
“The final product? Grain reduced or gone. The verdict? Occasionally pretty, and, if no one compares it to the original, quite acceptable.
“Although every digital facility promises grain removal, and some have a quality product in incremental stages, I’ve personally seen the work of only one facility that, to my eye, has the capability to remove or reduce grain and not affect resolution, and by that I mean [making the mistake of] removing a large chunk of high frequency information along with the offending grain.”

I wonder which facility Harris is referring to (i.e., the one that knows how to reduce grain the right way)? I’m guessing it’s in Los Angeles, but maybe not. I just need a hint, an acronym…something.
“The folks behind Blu-ray need to take a position,” Harris states. “Is their system to be used as promised, to give the home theater enthusiast the cinema experience? Or will our film heritage henceforth look like video games?
“Studio executives need to be educated about grain, whatever it is that makes up an image and how it gets to Blu-ray, or sit back and allow someone else to deal with the technical end of things.”