Play As It Lays

Yesterday TheWrap‘s Steve Pond reported that Sony Pictures is disputing Tom O’Neil‘s Gold Derby report (since corrected) that George Clooney‘s Monuments Men “will not be waging an Oscar campaign this season, saying that story jumped the gun and is incorrect.” Translation: After it gets shown around Monuments Men may settle in as (a) a smart, engaging, spottily humorous World War II ensemble drama (i.e., an art commando version of The Dirty Dozen or Kelly’s Heroes) or (b) the final version may convey something more than the sum of its parts and it may become an awards player…who knows? 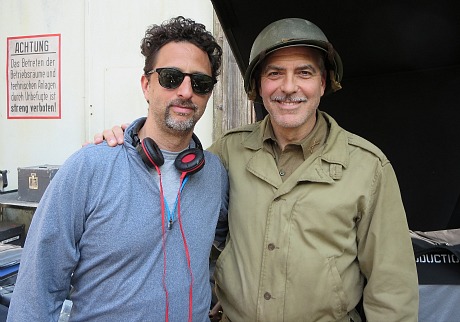 Either way Clooney knows what he’s made here and is shrewd enough to wait and see how it plays out.

“It’s premature for anyone to make any assumptions about what we have planned for the season,” Sony spokesperson Steve Elzer told TheWrap last night. “George just finished principal photography a few weeks ago. He is still cutting as we speak and that’s his focus right now. What we have seen of the film from dailies looks absolutely incredible.”

Directors are always cutting and re-cutting their films up to the last minute, of course, but Clooney told me during my set visit last May that he and his editors were assembling Monuments Men as they went along, and that he was obligated to deliver his director’s cut to Sony by…now I can’t remember exactly but I’m pretty sure he said sometime in July. (Or August.) Believe me — Clooney and Sony know exactly what this film is and what they have as we speak. The question is “what will the crowd say?”