Playboy, the Hugh Hefner biopic that Brett Ratner is supposed to direct sometime soon (next year?), is being scripted by John Hoffman, who most recently wrote Queen of the Jews, a piece about former Miss America Bess Myerson that Bill Condon will direct. 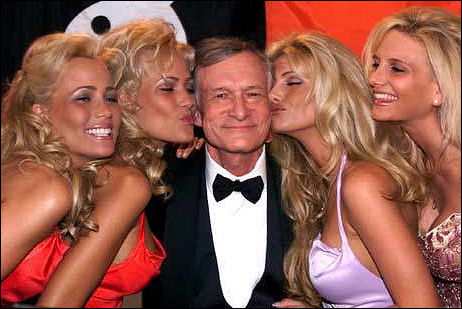 This presumably means that the musical biopic approach — first attempted by 8 Mile screenwriter Scott Silver — is out the window. Hoffman’s rewrite is reportedly being penned right now. Late last month Variety‘s Michael Fleming wrote that Ratner and Hoffman found a way to [tell Hefner’s story] that pleased [producer Brian] Grazer and the 81-year- old Hefner…in a meeting at the Playboy Mansion [in mid to late June].”
This is probably for the best. Attempting any kind of musical would be a stretch for a guy of Ratner’s interests and abilities. But two days ago someone slipped me Steve Baigelman‘s rewrite of Silver’s musical version, and a fairly recent one at that with a stamp that says “received by Imagine story dept.” on “Feb. 02, 2007.” And I was kind of wowed. Sink or swim, success or failure, this would be a real movie.
It’s a crazy screenplay, all right — a surreal dreamscape thing that would be more suited to a guy like Terry Gilliam — but it’s also smart, imaginative and out-there. It uses the notion of music and dance as a metaphor for the heady hormonal tonic of sexual liberal-ization in the 1950s and ’60s, when Hefner’s Playboy magazine became a symbol of the loosening of the repressed puritan ethos that America lived under until the first tremors happened in the late ’40s and early ’50s. 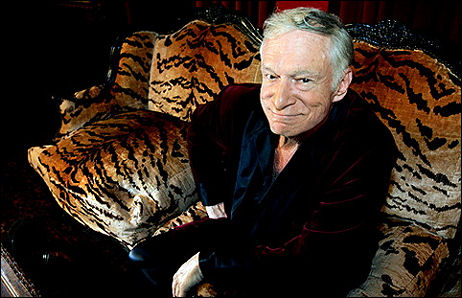 Okay, it may have been deemed too crazy but at least it’s up to something fairly bold and brassy — a kind of All That Jazz mixed in with a little Pennies From Heaven seasoning, a touch of The Purple Rose of Cairo and a sprinkling of Charles Dickens‘ “A Christmas Carol.”
It starts in 1985 — the year that Hefner had a stroke that led to a curbing of his houndish pursuits and a general reevaluation of his life. A 59 year-old Hefner is hosting a huge Playboy mansion party and yet — the entire movie essentially happens inside his head — feeling a little empty and sardonic, singing “Is That All There Is?,” the Peggy Lee standard.
He’s then startled to see a 26 year-old version of himself talking to one of his girlfriends. Old Hef and young Hef talk their life over (the latter assuming the upper hand), and from there the younger Hef takes us on a song-and-dance tour of Hef’s formative years in Chicago — his repressed childhood, living with his wife Mildred in his parents’ home, a fledgling cartoonist, a frustrating life as a copywriter, spending $9000 to publish the first issue of Playboy in 1953 (i.e., the one with Marilyn Monroe‘s nude calendar pix).
It starts to fast-forward around the two-thirds mark, shooting through the ’60s, ’70s and ’80s. It then moves past ’85 and into the present, ending with an 80 year-old Hef and replay of “Is That All There Is”?

All of the songs in Baigelman’s script are several decades old — mostly background music for the World War II generation. “Witchcraft” (Frank Sinatra), “Got The Moon In My Pocket, Got a Dream Up My Sleeve”, “I Never Knew Heaven Could Speak”, “Nasty Man” “All The Way” (Sinatra makeout song), “Fool That I Am, For Thinking You Loved Me Too”, “You’ve Got to Accentuate The Positive”, “As Time Goes By” and “Pennies From Heaven.” There are two boomer cuts — “And When I Die” (Blood, Sweat and Tears) and “I Got lIfe” (from Hair), plus Prince’s “1999” and Edgar Winter‘s “C’mon and Take a Free Ride.”
Hoffman’s non-musical version will either be a linear biopic (i.e., a boilerplate “this happened, and then this happened, and then this happened” approach). Or some kind of time-flipping, 8 and 1/2-ish, Hefner-looking-back movie — i.e, the Baigelman musical screenplay without songs. Or something else I’m not seeing.
For a few hours there (i.e., before I re-read the trade stories about the Hoffman rewrite), I thought Ratner might actually be planning to direct the Baigelman. That would have been one hell of a move. My respect for Ratner shot up several notches. Then I realized it’ll be something else. I wrote and called Ratner this morning to make sure the Hoffman version will be music-free, but no reply…yet.