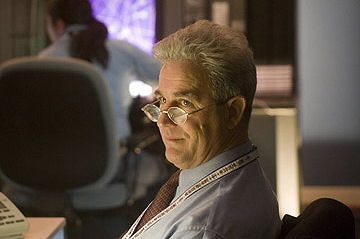 the great Ben Sliney (seriously) as himself in United 93

First group: (a) Ben Affleck as Superman actor George Reeves in Hollywoodland / HE verdict: forget Venice; (b) Forest Whitaker as Idi Amin in Last King of Scotland / HE verdict : is all this Forrest-is-getting-weaker, peaked-too-soon talk being kicked around all over or…?; (c) Helen Mirren as Queen Elizabeth and Michael Sheen as Tony Blair in The Queen / HE verdict : Mirren’s locked; Sheen’s looking pretty good for supporting; (d) Sienna Miller as Edie Sedgwick in Factory Girl / HE verdict: Miller’s terrif but the nommie thing’s on hold as no one except myself and F.X. Feeney have seen the film; (e) Renee Zellweger as Beatrix Potter in Miss Potter / HE verdict: has anyone seen this film, and if if she’s good isn’t the Zellwegger animus factor still pretty strong?
Second group: (f) Annette Bening as Deidre Burroughs in Running With Scissors / HE verdict: Bening’s a top-notch, very well-liked actress, but her performance has a certain root-canal quality; (g) Derek Luke as South African freedom fighter Patrick Chamusso in Catch A Fire / HE verdict: I bought and respcted his performance 100%, but is it Oscar-y enough?; (h) Adam Beach as Ira Hayes in Flags Of Our Fathers / HE verdict: chops aren’t there; (i) Nicolas Cage, Michael Pena, Maria Bello, Maggie Gyllenhaal as their real life 9/11 counterparts in World Trade Center / HE verdict: Bello or Gyllenhaal, maybe, but forget the guys; (j) Gretchen Mol‘s performance as a legendary ’50s pin-up model in The Notorious Bettie Page / HE verdict: won’t happen;
Third group: (k) Kirsten Dunst as Marie-Antoinette / HE verdict: c’mon…not a serious proposition; (l) Ed Harris as Ludwig van Beethoven in Copying Beethoven / HE verdict : has anyone seen this?; (m) Keisha Castle Hughes as Mary, mother of Jesus, in The Nativity Story / HE verdict : something tells me her being actually preggers at age 16 is going to work against her on some level; (n) Toby Jones and Sandra Bullock as Truman Capote and Harper Lee in Infamous / HE verdict : forget it; and…
Year’s Best Performance by a Non-Actor: (o) Ben Sliney as himself in United 93 — in all seriousness, a brilliant, fully believable, totally lived-in performance / HE verdict : Sliney’s the guy.