David Poland is “a lot more thin-skinned than Sammy Glick,” the L.A. Weekly‘s Ella Taylor observes in a just-up profile. “Like many people who make their living on the attack, he’s better at dishing it out than he is at taking it. Having regularly dumped all over L.A. Times Hollywood columnist Patrick Goldstein, he went public on the site with his distress when Goldstein hit back. 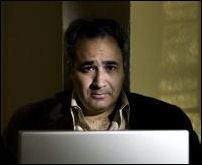 “Still, for all the bile of his well-known war with rival Hollywood blogger Jeffrey Wells — who, on Poland√É¬¢√¢‚Äö¬¨√¢‚Äû¬¢s direction, was ordered out of a carful of Poland√É¬¢√¢‚Äö¬¨√¢‚Äû¬¢s colleagues on the way to Sundance — he admits to a double-edged appreciation for his equally excitable enemy. ‘Sometimes,’ he says, ‘you just want to go to the circus.'”
Oh, I get it — there’s something broadly theatrical about reading Hollywood Elsewhere. Like listening to a carnival barker in a red coat or watching an Indian elephant stand on his forelegs. Okay, fine, but if HE is a carnival, Movie City News is….uhm…well….I can’t think of a good mean analogy just now. Any ideas?
Taylor calls Poland “a genial, self-deprecating motormouth” and opiners pretty plainly that he’s “shilling for the business on whose advertising he depends.” And yet, she adds, he’s “always an engagingly contrarian read” and
that she doesn’t ” know a critic or film journalist who doesn√É¬¢√¢‚Äö¬¨√¢‚Äû¬¢t check out Movie City News at least once a day, as much for diversion as for keeping up with trends in the business.”
Taylor reports that Poland’s Movie City News “boasts a million visitors a week,” but Deadline Hollywood Daily‘s Nikki Finke begs to differ (as well as toot her own horn) with this Alexa graph.